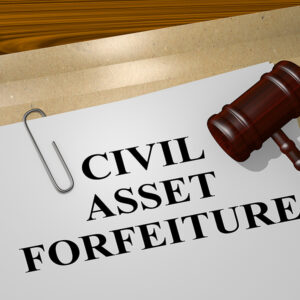 Every year, federal, state and local government agents take — and permanently keep — billions of dollars of Americans’ property through a practice known as civil forfeiture.

Civil forfeiture allows police officers to seize property based only on probable cause to believe that the property is related to crime. Later on, prosecutors can shift the ownership of the property to the government through litigation in civil court, even if the property owner never faced criminal conviction or even criminal charges. The danger that poses to people’s property rights and due process raises serious questions about legitimacy and fairness.

It’s a system that creates significant benefits for interest groups within government, such as policymakers, police officers and prosecutors. So those advocates and beneficiaries conjure certain myths about civil forfeiture that seem aimed at tranquilizing public concerns.

What are those myths?

They claim a typical cash seizure amounts to a lot of money. It doesn’t. In reality, it’s  more like several hundred dollars to a little over $1,000.

They claim that when property is seized, the owner can recover it in court. That’s not what happens. For someone deprived of hundreds of dollars, paying a lawyer thousands to try to retrieve it is not cost-effective.

They imply seizure and forfeiture are governed by due process of law. In reality, there is slim likelihood of recovery, a low standard of proof that empowers law enforcement over civilians, and powerful government revenue incentives at work that stack the deck.

They say our justice system requires high standards of proof of wrongdoing for seizures and forfeitures to occur. In fact, people’s property is regularly taken without any such evidence.

They say whatever injustices there were have been reformed when states require a conviction in criminal court as a prerequisite to forfeiture litigation in civil court. In practice, that’s not true, because there is often no connection between the crime and the property owner. For instance, a mother innocently lends her son her car; but if the son then is suspected of a crime while driving it, then the car can be seized and forfeited.

That’s how the public gets victimized, first by civil forfeiture, then by false narratives spread by forfeiture beneficiaries. Property owners remain unprotected and defenseless.

It’s certainly possible to fix the system. Policymakers could change the legal process so that forfeiture takes place as part of a criminal trial, not a separate civil procedure. That reform would require forfeiture to take place only after a property owner’s criminal conduct has been proven. Such a reform would also make it much more likely that property owners would receive due process in court. That reform would have the added benefit of forcing policymakers to fund more of government by openly taxing its citizens, not stealthfully taking things from them.

Until legislators enact such reforms, law enforcement and government will continue to seize billions of dollars from hapless citizens every year.

Dan Greenberg is a lawyer, former state legislator, and author of a new report for the Competitive Enterprise Institute on civil asset forfeiture. He wrote this for InsideSources.com.