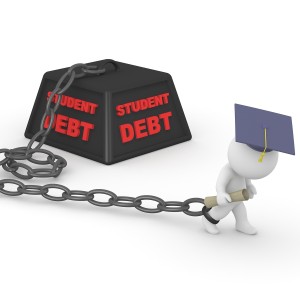 Don’t Forgive Us Our Debts: The Case Against Student Loan Forgiveness

Graduation season is just around the corner. But the happy occasion will be tinged with apprehension for many new graduates who will face their first serious debt—student loans. About 70 percent of college graduates in 2014 had student debt averaging $33,000.

Like many young Americans, I have student loans, which I’ve been paying off one month at a time. I groan at my interest rate, lament the departure of money from my checking account, and question whether that class on “Mexican Folk Healing” was really worth the $3,000. Together, my fellow college grads and I owe over $1 trillion for our education.

In response to this burden, some suggest that student loans be reduced or forgiven. They claim that forgiveness would stimulate economic activity by giving many Americans extra money to spend on goods and services. This spending, it is argued, would lead to increased business, new jobs, and a growing economy.

In fact, debt forgiveness is a really bad idea.

For one thing, “prime the pump” economics is fallacious. The economy isn’t a machine the government can manipulate to achieve particular outcomes. Rather, it’s a complex system of interactions between many buyers and sellers. The only way to expand the economy is to increase productivity through savings and innovation. Throwing dollars at consumers does exactly nothing for economic growth.

Some suggest that eliminating student debt would yield other benefits, such as allowing more people to go to college. But loan forgiveness would affect only those who already have a college education; it would be of no assistance to those who haven’t yet gone to school – unless the government guarantees that future loans will be forgiven as well. That guarantee, however, would have many bad consequences.

For example, it would likely increase college tuitions. In fact, this is precisely what we’ve observed with current education subsidies. As these subsidies increased demand for education, they pushed the price upward. In essence, loan forgiveness would be one giant subsidy, creating perverse incentives for both schools and students. If schools knew the government would forgive the cost of their students’ education, they’d face no incentive to cut costs to keep tuitions down. If students knew their loans would disappear, why wouldn’t they attend more expensive private schools rather than cheaper state schools?  By forgiving loans, the government would encourage students to undertake education that may be a poor investment because they would not face the consequences of their choices. Who would pay for all this? The taxpayers.

Advocates of loan forgiveness claim that banks take advantage of student borrowers, who are “forced” to pay those high costs of debt repayment. But they are not forced; the loans are absolutely voluntary. Moreover, student borrowers are painfully well-informed. Every semester I had to pass an online quiz testing my knowledge of the loan process. Students know how much they’re borrowing, how much they’ll pay back, and how much of that amount is pure interest. Some may argue that 18-year-old students can’t comprehend what they are agreeing to, but this argument, if consistently followed, would deny thousands of young Americans the opportunity to attend college.

Education is an investment. I tell my students they’re likely to earn substantially more than their colleagues who lack a college education. Student loans allow people without resources to undertake this investment. Were the government to decree that student loans no longer required repayment, many students would be unable to attend college at all because banks, knowing they may never recoup their money, would become less likely to lend to students. Lower-income students would especially suffer as a result.

No one likes the idea of young graduates starting out tens of thousands of dollars in debt. The proposal for student-loan forgiveness, however, deserves a failing grade. If we really want to lighten our college grads’ debt, perhaps we should encourage students to incur fewer expenses in the first place. Instead of suggesting loans, encourage students to work. Instead of the high-priced university, how about a less expensive college or two-year local community college? In these ways, we can help our students curb their debt without creating bad unintended consequences by forgiving it.