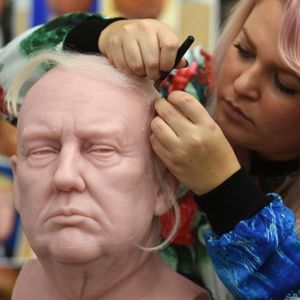 When Donald J. Trump was sworn in as president Friday, he entered history books. But he also joined an equally exclusive group: The assembly of waxed figures at Madame Tussauds Museum in London.

In anticipation of a close election, Tussauds sculptors started working well before the election on the heads of both Hillary Clinton and Trump. The process typically takes three to four months.

The latest images of the mock-up from the museum show an unsmiling and grave Trump, looking with a downward pout and lowered eyes — which psychologists refer to as the “alpha face,” showing dominance.

Trump has been on display at the museum’s New York site since 1997. Similarly, Clinton has been on view at the New York venue since 2006 when she was a senator.

Principal sculptor David Gardiner, who is making the head for the Trump figure, said that he was “really lucky that I had information for Donald Trump’s sitting that we had in 1997, at the Trump Towers. … I used that for the sizing.”

Because Trump has aged 20 years since his original sitting, a new sculpture was needed. Usually, Tussauds sculptors have to rely upon measurements, sketches and photographs. Because of the expense and time involved, only occasionally are figures selected to sit for their modeling.

As in the 19th century, the heads are still made of plaster of Paris, and eyes of glass. The composition of the wax is a tightly held trade secret.

To replicate Trump’s signature bouffant hairstyle, artists are using hair from the underbelly of a yak — a shaggy pack animal that is native to the Himalayas.

Traditionally, Tussauds has the figures of U.S. presidents standing behind a replica of the desk in the Oval Office, which gives visitors the opportunity for a “photo-op” with the president standing behind them.

Louise Baker, archivist and curator at the London museum, says that part of the appeal of the exhibition is that it gives the public the opportunity to interact physically with the uncannily realistic figures. President Obama is depicted, she said, with a “warm, friendly, even a cheeky” expression, and guests often engage with him in a light-hearted way, shaking hands and even putting their feet on the desk.

Pamela Pilbeam, a leading historian of Tussauds, says that “the secret of the appeal of wax lay in the liberation of the observer from all normal rules of politeness and consideration of others.Visitors could walk up to a succession of lifelike kings and queens, stare at them, and talk about them frankly for as long as they liked.”

Not all mannequins have had such a warm reception, however. During World War I, one angry visitor used a sword to cut off Kaiser Wilhelm’s head. Adolf Hitler’s statue was repeatedly attacked after it was unveiled in 1933, and was put behind glass in 1936. But it was not until January 2015 that Hitler was finally removed from the London museum altogether (making Winston Churchill, who used to stand next to Hitler, a solitary figure).

Like Trump, Madame Tussaud (1761-1850) was herself a successful entrepreneur who embraced popular culture and understood what people wanted to see. Born in Paris, she narrowly survived the terror that followed the French Revolution, making impressions of the severed heads of some of victims of the guillotined: among them some of her friends. Tussaud moved to England in 1802 and after touring the country with her collection of wax figures, she opened her famous exhibition on Baker Street in 1835. (The museum moved to its present site in Marylebone in 1884.)

Famous Americans who visited Tussauds London in the 19th century include the satirical American writer Mark Twain, who during a visit to Tussauds was stabbed in the side with a parasol by an astonished British matron who exclaimed of one wax figure: “It’s alive!”

Wax is a strange medium — both real and unreal, and with a long history since ancient times of representing life and death, truth and deception. Trump’s inclusion in the Tussauds waxworks is a fitting symbol of the close entanglement of celebrity and politics since the birth of the modern age.

More than other media — such as stone monument, or oil on canvas — wax is the ultimate medium for conveying to the public the uncanny, and illusionistic character of the Trump presidency. Wax models do not easily fit into definitions of what is “art” any more easily than Trump fits into established ideas of an American president.

Jennifer Tucker is associate professor of history of science at Wesleyan University in Connecticut.