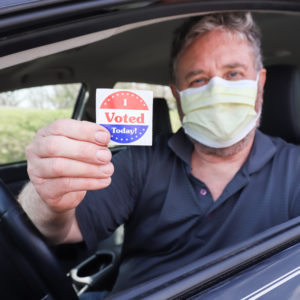 Don’t Make Americans Choose Between Voting and Their Health

Posted to Politics May 01, 2020 by Ron Klein and Bob Kueppers

The COVID-19 epidemic has democracy in its crosshairs.

Across the globe and throughout the United States, it is wreaking havoc on campaigns, party conventions and the most sacred of democratic principles — the right to vote.

While we cannot know the state of the pandemic at the time of the November elections, policymakers and election officials must act now to ensure that COVID-19 is neither a public health threat nor a deterrent to participation.

No American should be forced to put his or her health at risk to vote, or to serve as a non-partisan election worker — and they need not. There are several approaches already in use in many states that would solve the problem. The other states should act now to put those solutions in place.

Four out of five states allow some form of early in-person voting. About two-thirds of states allow absentee voting without requiring an explicit justification, including five states that conduct their elections primarily by mail.

Remote voting is a necessary option for people with risk factors for the coronavirus, but even in-person early voting provides a greater measure of safety for individuals able to head to the polls before Election Day while contributing to safer polling places for everyone who cannot. However, some states are currently operating without either option in place.

How the risks of the virus may weigh on would-be voters is hard to predict. But Americans’ reluctance to re-enter situations with larger crowds, apparent on recent surveys, is troubling for what it might portend for November’s election.

For instance, nearly three quarters of sports fans have reported that they wouldn’t feel safe attending a game before a vaccine is developed, and a fifth of Americans thought it would be at least six months before they felt comfortable going to a restaurant.

The federal government, the Congress, and state governments must act now to ensure that voters and poll workers are protected in November.

First, during a continuing public health emergency, all would-be voters must be able to easily obtain and cast a postage-paid mail-in ballot. Minimizing the in-person contact required to vote is the strongest possible safeguard for the health of voters and poll workers.

All states should allow easy access voting by mail without requiring any justification on the part of the voter. These voting procedures must replicate all of the requirements of existing procedures in the states that already use them to ensure the accuracy of the election and to protect against voter fraud.

Second, to further reduce crowds on Election Day, every state should offer at least 10 days of early voting, including weekends and evenings. Spreading in-person voting across multiple days and hours will help voters to avoid long lines and will reduce peak crowding within polling stations at popular times.

Third, election officials must ensure that poll workers, voters and their communities are protected during voting. Poll workers need training, equipment and supplies to keep polling places safe, including facilitating proper spacing among workers and voters.

Each of these steps is consistent with recommendations for election officials issued by the Centers for Disease Control and Prevention. But carrying them out will require planning, resources and time.

With states and localities already financially burdened by the COVID-19 pandemic and facing sharp revenue shortfalls as a result, the federal government must step up and provide the needed resources — and quickly.

While public resources should always be spent judiciously, avoiding the expense of preparing for full and safe participation should the pandemic continue is a false economy. The United States cannot afford to risk public health or trust in the fair conduct of elections.

As trusted voices in their communities, business leaders can play a critical role.

They can provide needed infrastructure and technology assistance pro bono (as several businesses have already done since 2016) and also reach out to help voters — especially their employees and customers — understand all the options for voting while remaining safe.

Further, they can create reminders and opportunities for their own employees to vote early, reducing their communities’ risks and pressures on Election Day.

American voters should not have to choose between exercising their franchise and protecting their health. And policymakers and business leaders should not leave the health of U.S. democracy to chance.

Instead, they should act quickly to prepare for November.

Ron Klein is a partner at Holland & Knight LLP and a former U.S. representative from Florida. Bob Kueppers is chair of the Subcommittee on Democratic Institutions, Committee for Economic Development of The Conference Board. They wrote this for InsideSources.com.