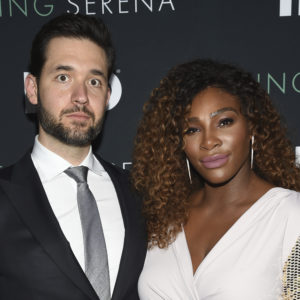 Serena Williams and husband Alexis Ohanian attend the premiere of HBO's "Being Serena" at the Time Warner Center on Wednesday, April 25, 2018, in New York. (Photo by Evan Agostini/Invision/AP)
[IS] Opinions

During an insightful interview that fused two components of Serena Williams’ life — love and athletics — the tennis superstar stated: “It’s interesting. I never thought I would have married a white guy … so it just goes to show you that love truly has no color, and it just really goes to show me the importance of what love is.”

Serena Williams started dating tech industry entrepreneur/venture capitalist Alexis Ohanian in 2015; they were engaged in December 2016 and married in November 2017. Ohanian, son of a German mother and Armenian father, is the co-founder of Reddit, the social media site.

Williams was the subject of a recent lengthy and eye-opening New York Times article focusing on her restart this year on the pro tennis tour after the birth of her now-8-month-old daughter, Olympia (“Baby O”), and her new HBO reality-TV-type docu-series, “Being Serena.” The five-part series “tracks her pregnancy, her life-threatening postnatal problems and her comeback in remarkably unvarnished fashion.”

Williams’ interracial love match largely has been readily accepted by the black community. She doesn’t appear to have been chastised or ostracized in any measurable quantity. In fact, it appears Serena can do no wrong in the eyes of many black folk.

Sixteen years ago, Tiger Woods probably wished he could say the same.

When word spread in 2002 that Tiger was dating Swedish beauty/nanny Elin Nordegren (who later became his wife), Woods was lambasted in many corners on message boards across black-oriented websites.

One reader posted 16 years ago: “I like and admire the golfing genius of Tiger Woods. But I sincerely hope he doesn’t wait until his so-called white friends cut his legs out from under him and they will when the chance comes. … He will then want to identify with his brothers and sisters and come back to the fold.”

Why the double-standards handed out like candy from some black observers Perhaps, the issue is authenticity.

Is it because Serena, who turns 37 in September, grew up in a hardscrabble environment … straight outta Compton, Calif., literally. Perhaps, it’s because Serena still shows off her powerful serve in a previously white-dominated sport. Or because Serena fits this popular ethnocentric expression: “unapologetically black.”

Whatever the reason, black women celebrities involved in romantic relationships with rich, white guys appears to be an en vogue kind of thing these days.

Serena’s older sister, Venus, who turns 38 in June, is dating Nicholas Hammond, a 26-year-old financier, according to the New York Daily News. Hammond also is an heir to the “TV Guide” fortune, as his mother’s grandmother was a sister of the late Walter Annenberg. Yes, that Walter Annenberg, the media mogul/philanthropist who launched trendsetting “TV Guide” as a national magazine in 1953 and has his name on journalism/mass communications schools at the University of Pennsylvania and the University of Southern California, as well as on the main theater at the Newseum in Washington.

Anyone who watches PBS has heard of the Annenberg Foundation. And, according to the New York Daily News, Hammond’s family has at least two $20-million mansions — in Palm Beach, Fla., and Long Island’s Hamptons.

Serena, in the New York Times story, spoke of the sociological effect of her marriage this way: “Literally, all I tell Alexis is, ‘Well, you know, there’s such a difference between white people and black people.’ He always gets to hear about the injustices that happen; that wouldn’t happen if I were white.”

Perhaps Serena’s concerns about racial injustices will be mentioned as the White House, according to Politico, explores the possibility of hosting multi-racial summits on race with prominent athletes (polarizing former NFL player Colin Kaepernick reportedly is one of the invitees) and artists and President Donald Trump. Eccentric rapper Kanye West’s passionate praise of Trump last week apparently helped give the idea a major boost, according to one of Trump’s closest black advisers, Cleveland-based the Rev. Darrell Scott, who met with Trump on the recent National Day of Prayer.

Scott and Andrew Giuliani, a top aide in the White House Office of Public Liaison and son of Trump lawyer Rudolph Giuliani, are in charge of the organizational logistics of the summit. It would take a summit for Tiger Woods to repair feelings of injured pride and deep betrayal with many in the black community.

Tiger doesn’t publicly acknowledge himself as a black guy in a straightforward way, preferring to speak instead about hybrid ethnicity; remember, 21 years ago, after dominating the Masters golf tournament, he used the self-described racial term “Cablinasian” on Oprah Winfrey’s show, much to the ire of black critics nationwide.

We’ve noticed that, at least outwardly, all of Tiger’s love interests have been white, with tall blondes being the usual M.O. Serena had dated black and white guys before marrying the 35-year-old Ohanian, who grew up in Maryland.

One of the more revealing elements of the New York Times article was the reaction of Serena’s overbearing father, Richard, who for years has been extremely controversial on racial matters. However, in this instance, Serena explained: “And my dad absolutely loves Alexis.”

And it appears President Barack Obama’s eldest daughter, Malia, is following in the footsteps of the Williams sisters. Her boyfriend is purported to be Rory Farquharson, a white guy who hails from the United Kingdom and is her classmate at Harvard University. We have seen TMZ photos/video of them kissing at Harvard football games and paparazzi images of them shopping in New York.

According to British media, Farquharson’s father is Charles Farquharson, the chief executive of Insight Investment Management Limited, based in London. His mother is Catherine Farquharson, a certified accountant.

Malia Obama is no longer a youngster being sheltered in the White House; she’s a young woman out in the world now (turns 20 years old in July). Because her father was revered by millions of black voters, Malia likely is entrenched in sort of a love-interest “safe space.”

Like the Williams Sisters, an eternal space, for sure.