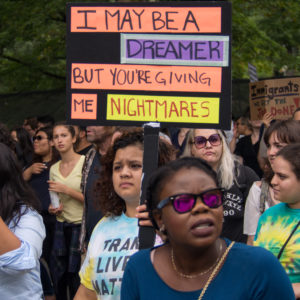 Posted to Politics February 26, 2020 by Arthur Rizer and Prabisha Bhandari

Once again, it’s that time of year when college seniors begin picking up their caps and gowns, knowing that all the countless hours and thousands of dollars they have put toward higher education will soon pay off.

Among these soon-to-be graduates are students who are worried about their future due to the uncertainty surrounding immigration laws.

Enacted by former President Barack Obama in 2012, Deferred Action for Childhood Arrival provided undocumented immigrants whose parents brought them to the United States before age 16 the opportunity to defer deportation, allowing them to live and work legally. In 2017, President Trump ordered an end to DACA, leaving 800,000 young adults unsure about their future in this country.

The Supreme Court is set to make a decision concerning the legality of Trump’s order this spring, but until then, thousands of undocumented students are left in limbo.

DACA recipients, referred to as “Dreamers,” have fallen victim to a false narrative. They have been referred to as “very tough, hardened criminals,” which is simply not true. To be eligible for the programs, applicants cannot have any significant criminal history.

There are no data suggesting Dreamers commit crimes at higher rates than native-born residents. In fact, most research suggests that immigrants, including those here illegally, commit crimes at a lower rate than native-born citizens. Suggesting Dreamers are criminals based solely on the fact that they were brought to this country through no fault on their own is disingenuous at best.

DACA gave Dreamers security and hope of a brighter future. Under the program, they have been able to further their education, become involved in their communities, and fill jobs in sectors ranging from health care and education to construction and hospitality. This may change if DACA is halted permanently.

Although the Trump administration has maintained that the program’s recipients will not all be deported, deportation is once again a looming threat. Dreamers pulled over for small traffic violations may find themselves in an Immigration and Customs Enforcement detention center.

Many feel isolated at their schools and jobs because they do not know who they can trust. They become hyper aware that all it takes is one phone call, one disgruntled person’s complaint, to have them removed from a country they have called home for most of their lives.

Not only is it cruel to end DACA, it is also economically disastrous. Dreamers currently contribute $5.7 billion in federal taxes and $3.1 billion in state and local taxes. The Cato Institute found that the removal of DACA would result in a loss of upward of $60 billion in tax revenue over the next decade.

Furthermore, if Dreamer employees are no longer able to work, businesses across the nation will bear the financial consequences. This results in increased turnover costs for business owners as they spend resources recruiting, hiring and training new employees. Employers reluctant to replace their Dreamer employees face the threat of prosecution themselves. Ending DACA would mean pushing people attempting to better themselves and their communities back into hiding, where they may be forced to turn to the black market for jobs.

The end of DACA also means the end of many young people’s hopes of pursuing a higher education. Without DACA, many Dreamers paying in-state tuition will have to pay international tuition, which is approximately three times the cost. Unable to pay the new price, many will have to drop out.

As of 2017, George Mason University in Fairfax, Virginia, provides in-state tuition for approximately 300 Dreamers. If DACA ends, 300 young adults may find themselves having to give up on a goal they have been working toward for years.

This treatment of Dreamers is backward. We should not be treating these young people as threats to our country, but rather embracing them as the assets they are. More than 80 percent of Dreamers have taken college courses in the hopes of pursuing a higher education, but may soon find that goal out of reach.

Many Dreamers who have earned a degree are now looking at jobs overseas. These are people who have grown up here, who were educated here, who gained all the resources and knowledge required to be an important part of the workforce here, and we are letting them go.

Obtaining a degree is a challenging endeavor for anyone. Many Dreamers, who have endured the struggles of college while simultaneously facing the fear of immigration issues as well as financial pressure — have managed to succeed. These are some of the most hardworking, driven and inspirational people around, and we would be lucky to have them join our workforce.

The end of DACA does not just mean we are losing people; it means we are losing great minds who are an integral part of this country and its future.

Arthur Rizer is the director of criminal justice policy at the R Street Institute. He is also an adjunct professor at George Mason Law School. Prabisha Bhandari is a first-generation immigrant who recently graduated from George Mason University. They wrote this for InsideSources.com.