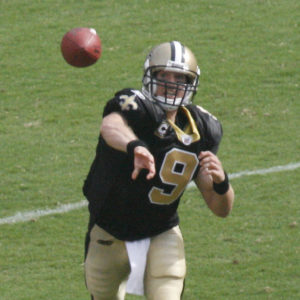 Based on the out-of-control backlash, one would have thought Drew Brees had committed a horrific crime a few weeks ago. What did Brees do?

Well, the New Orleans Saints quarterback associated kneeling during the national anthem with disrespect while saying this to the “Yahoo Finance” website:

“I will never agree with anybody disrespecting the flag of the United States of America or our country. … Is everything right with our country right now? No. But I think what you do by standing there and showing respect to the flag with your hand over your heart, is it shows unity.”

NBA superstar LeBron James, as usual, was quick to the draw, blurting on social media, “WOW man. Is it still surprising at this point? Sure isn’t. You literally still don’t understand why Kap (Colin Kaepernick) was kneeling on one knee?? Has absolute nothing to do with the disrespect of (flag emoji) and our soldiers (men and women) who keep our land free.”

And therein lies the disconnect. It appears that many black activist athletes, such as LeBron, fervently believe that everyone must automatically or innately maintain this stance: Kneeling doesn’t disrespect the flag or military or the national anthem.

Remember, defensive back Malcolm Jenkins, one of Brees’ new teammates, scolded Brees, even telling him to “shut the (expletive) up.”

However, many citizens adamantly believe the exact opposite. Travel to America’s Heartland. Visit small-town USA. Walk with the flag-loving folk. That disconnect obviously is at the heart of this matter.

It was openly exhibited by Michigan-based Karen S. Wood, a sales manager for Culligan, a water-treatment company, and an ardent Detroit Lions fan. Wood, a white woman, related that she plans to not watch NFL games if kneeling persists next season.

“Because I equate kneeling with disrespecting the flag, national anthem and the military,” Wood said.

Brees, during his original comments, paid homage to his grandfathers fighting in World War II. So did Wood for her grandfather. Even LeBron, in his first comment, offered this, “My father-in-law was one of those men who fought as well for this country.”

Then, they diverge, with Brees and Wood on one side and LeBron on the other.

Here’s another point: If kneeling isn’t about the flag, anthem or military, then why not kneel at a different time, such as during the coin toss.

Also, note this controversy — in the wake of the much-publicized George Floyd killing by police in Minneapolis — arose when many black NFL players related they would engage in kneeling again to protest police brutality, a practice that Kaepernick initiated during the NFL preseason in August 2016.

Obviously, in an effort to ameliorate the blowback toward him, Brees apologized, saying he “missed the mark” in exhibiting “insensitivity.” Then, he apologized again. Later, his wife, Brittany, apologized.

Yes, a family Brees-ing with apologies that also has been known in NFL circles for exemplary humanitarian work. They definitely have cachet on the bayou. With that, couldn’t Brees have stood his ground on the Kneeling Conundrum?

Brees didn’t defame anyone by name. No character assassinations. Didn’t commit a violent act. Brees obviously was passionate about his original beliefs. Whatever happened to that novel concept known as free speech?

Is everyone obligated in our society to reflexively believe that kneeling during the national anthem isn’t a gesture of disrespect?

Which begs another question: Who is really the more intolerant party here, the pro-kneeling crowd or the anti-kneeling bunch?

And the temperature for both surely will increase with the police killing of Rayshard Brooks at a Wendy’s restaurant Friday night in Atlanta.

Perhaps, the next time Brees is motivated to speak out on social issues, he should consult with LeBron and Jenkins for their permission regarding his thoughts. How about that?

Robert Cottrol is a law professor at George Washington University; his specialty is interpretations of the Second Amendment. But that doesn’t preclude him from weighing in on matters of speech.

“What we have here is the Thought Control Police,” Cottrol said. “That means you aren’t allowed to say things without their approval. If you do, then they will try to destroy you professionally, economically and personally.”

Maybe Brees’ moonwalk off his original comments was induced because of health concerns on the field. What about a speedy defensive end or enraged linebacker taking an unnecessary shot at him. Could there be a bounty on a Brees this fall?

Or perhaps he really was worried about his post-NFL career.

Brees, 41, already has a deal in place to become an NFL broadcaster for NBC Sports when he retires. That’s important because we have noticed numerous white professionals — from TV dance maven Abby Lee Miller to “The Flash” show star Hartley Sawyer — have either been suspended or fired or have resigned because of controversial racial comments uttered or written in the aftermath of George Floyd’s death and subsequent protests.

“From what I can see, these issues involving Drew Brees and television shows and movies aren’t about the First Amendment and the Constitution,” Cottrol surmised. “Because they involve private parties and not the government. HBO Max has the right to pull ‘Gone With the Wind’ if it wants because it’s a private entity.”

Instead, these issues more so are about collective subjugation, also known as thought control.