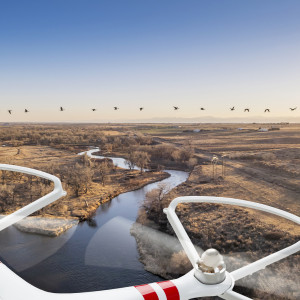 Broader use of commercial drones would become legal in the United States under a bipartisan bill introduced Tuesday in the U.S. Senate.

Current law allows businesses to operate drones only with special permission from the Federal Aviation Administration, which is granted on a case-by-case basis.

Under the Commercial UAS Modernization Act — sponsored by Sen. Cory Booker, D-N.J., and Sen. John Hoeven, R-N.D. — many companies would be permitted to use these aircraft as long as they operate within certain parameters. These include flying only during the day and keeping below 500 feet in the air. Drones would need to meet certain technical regulations and their operators would be required to pass an “aeronautical knowledge test.”

All of the regulations in the proposed bill are intended to be temporary, as the FAA is currently at work on permanent drone rules. But since those regulations could take years to finalize, Booker and Hoeven are pitching their legislation as a means of supporting business innovation in the short term.

“We’re on the frontier of a whole new era of aviation, when remotely piloted aircraft will improve crop production, provide valuable aid for first responders and even deliver packages to our doorstep,” Hoeven said in a statement.

In his own statement, Booker expressed concern that other countries have outpaced the U.S. on drone regulation. He said the proposed legislation “sets up clear and immediate rules of the road, helping to lay a foundation that will allow us to make cutting-edge progress in a rapidly emerging field.”

The bill could also prevent “brain drain” of drone engineers to other countries, according to Daniel Castro of the Information Technology and Innovation Foundation, a Washington, D.C., think tank.

When it comes to drones, Castro told InsideSources, “the United States should be at the forefront, and we could be if we change our policy. … It’s exciting to see more and more policymakers start to recognize that.”

The introduction of the Commercial UAS Modernization Act came just one day before a separate drone-related announcement by the FAA. On Wednesday, the agency launched a public outreach campaign about the current prohibition on drone use in the D.C. region, stressing that “the District of Columbia and cities and towns within a 15-mile radius of Ronald Reagan Washington National Airport are a No Drone Zone.”

Security concerns have made the airspace around the nation’s capital the most restricted in the country. As a result, anyone visiting the area “should leave their drone at home,” FAA Administrator Michael Huerta said in a statement.

Of course, it’s possible that Washington’s local drone rules may someday loosen with the rest of the country’s, as Castro of the Information Technology and Innovation Foundation suspects. In a follow-up email to InsideSources, he called the existing drone prohibition “a bit heavy-handed” and argued that D.C. would be an ideal location for the type of drone-based package delivery programs Amazon.com has proposed.

“Sure, ban [drones] near DCA, the White House, and the Capitol. But a kid flying a quadcopter in Rock Creek Park is not a threat to national security,” he wrote.