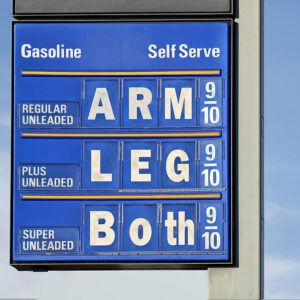 Posted to Politics May 26, 2022 by Gregory Bresiger

Blame outrageous gas prices on big oil companies, which must be stopped by government price controls.

That’s the essence of a controversial bill passed by the Democratic-controlled House last week. “The Consumer Fuel Price Gouging Prevention Act? is the party’s response to gas prices hitting new records across the country.

The makes it a crime to sell gas at “unconscionably excessive prices during an energy emergency.” The measure gives the president and the Federal Trade Commission new powers to penalize.

And the House bill’s sponsor, Congresswoman Kim Schrier (D-Wash), tweeted “At a time when people in my district are feeling the pain of high prices at the pump, Congress needs to be doing all we can to bring down costs.” The measure is another attempt to use government action to impact high prices by allowing President Joe Biden to declare an emergency and then set prices.

So will it work? Most economists say no. And they point to the price control disasters of the 197os. Indeed, many energy industry experts say the bill gets the problem backward. It’s government action — most notably restrictions on production and refining petroleum — that goose up prices.

“We don’t really believe in price gouging. We think there are market shortages when demand spikes up. It is a natural. When there’s anticipation of a greater demand for a product, more people will drive up the price,” says Tom Giovanetti, president of the Institute for Policy Innovation. He adds prices are rising because new supply “has been restrained.”

The anti-gouging bill would make things worse for consumers, complains Thomas Pyle, president of the American Energy Alliance. The Biden administration “has taken repeated action to suppress and prevent domestic oil and gas production. Now these chickens are coming home to roost as American families face rising energy prices at the pump.”

And what about giving the president the power to declare an energy emergency and put a cap on price hikes?

On Aug. 15, 1971, as oil prices were rising, Nixon declared in a nationally televised address,  “I am today ordering a freeze on all prices and wages throughout the United States.”

After a 90-day freeze, increases would have to be approved by a “Pay Board” and a “Price Commission,” with an eye toward eventually lifting controls after the 1972 election.

William Walker, who served as deputy director of the federal Cost of Living Council from 1972 to ’74, says the scheme failed.

“The administration slapped a freeze on beef prices, but ranchers retaliated by withholding cattle from slaughter, and meat disappeared from store shelves. It declared an embargo on exports of soybeans to avert an impending shortage. Nothing worked,” Walker wrote in The Wall Street Journal.

Still, the anti-gouging bill has political, if not economic, appeal, says Mark Thornton with the Mises Institute.

“It portrays the government as doing something about high fuel costs when in fact the government is responsible for high fuel prices. It can be harmful to business and consumers in the short run and once on the books could be used in some future green campaign to eliminate gas stations in favor of electric cars.”

Thornton says the lower gas prices of two years ago can be restored without price fixing.

“Energy prices could come down with policies similar to those of the previous president. I would say go all out for fossil fuels and let power companies open coal plants and start new nuclear power plants. Create a tax credit for investment to turn natural gas into LNG (liquified natural gas).”

Ending the war in Ukraine, he adds, could also reduce prices by increasing supply.