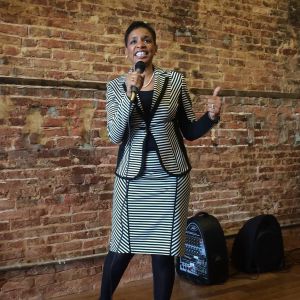 BALTIMORE — Before introducing Rep. Donna Edwards, D-Md., at a campaign stop Saturday, one of the Senate candidate’s supporters warmed up the crowd with a surprising political weapon — Disney Channel nostalgia.

Evoking her 4-year-old granddaughter’s favorite show, Women for Donna Chairwoman Karren Pope-Onwukwe compared the congresswoman to Kim Possible, the crime-fighting animated superhero who first splashed across television screens between 2002 and 2007.

Possible isn’t a perfect avatar for Edwards — she’s a red-haired white girl as the congresswoman is centering black identity in her pitch to voters — but the character certainly captures the kind of kick-butt femininity she hopes will set her apart from Rep. Chris Van Hollen, her male rival in the April 26 Democratic primary.

As that quote suggests, Edwards and Van Hollen are battling over liberal bona fides in one of the country’s most competitive campaigns — she’s a hardliner, he’s a deal-maker who says he gets more done. But race and gender are also obvious contours of their race to replace retiring Democratic Sen. Barbara Mikulski, as a January survey from Gonzales Research & Marketing Strategies makes clear.

Likely black voters backed Edwards by 50 points. Likely white voters chose Van Hollen, who is white, by 40. It’s closer among likely women voters, but Edwards is ahead by seven. Van Hollen is winning men by 14.

What’s unusual about this race is that how neither candidate has a built-in following in Baltimore County, the battleground expected to decide their contest. With Edwards predicted to thrive in her Prince George’s County constituency and Van Hollen dominating with his Montgomery County base, the campaign will almost certainly turn on Charm City and its surrounding area. Gonzales had Edwards with twice Van Hollen’s support in the city, but Van Hollen leads by 16 points in the suburbs. The congressman isn’t standing still either. He launched $1 million in Baltimore television ads, made possible by a staggering 10-to-one fundraising advantage over Edwards.

For the congresswoman, this is where identity politics come in. She’s bolstered by her own $1 million in ads for the pro-choice Democratic women’s group Emily’s List. And on Saturday, she used gender, race and class to campaign against Van Hollen without ever mentioning him by name.

Edwards told the story of raising her son as a struggling single mother, leaving unspoken that her opponent was a child of privilege who now represents one of the most affluent counties in the nation. 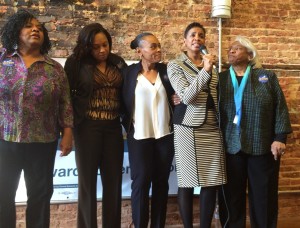 “It matters what experience and perspective you bring to the table, because that’s what helps you make decisions about what’s a priority and what’s not,” she said.

In a more explicit riff, Edwards concluded a speaking program comprised entirely of black women by warning against “elected leaders who are willing to substitute their voice and their judgment for yours.”

“After almost 240 years of our history, with one black woman elected to the United States Senate on her own, 20 women serving currently … my goodness, we don’t need a substitute for our voice,” she said.

There are a few factors complicating Edwards’ pitch. The political arm of the Congressional Black Caucus declined to endorse her, though her campaign brushed it off as the work of the group’s board member whom Edwards defeated in her 2008 congressional race.

Then there are the politics of Edwards’ presidential endorsement. She backed Democratic front-runner Hillary Clinton before Bernie Sanders declared, but some of her supporters think she should be with the socialist Vermont senator, arguably more of her ideological soulmate.

This position has led Edwards to highly nuanced statements about the White House race, including what she told InsideSources: “I feel strongly about Bernie Sanders’ campaign and about the issues that he’s raising. I think it’s healthy for the Democratic Party to have a strong — and progressive — debate about our future, and I look forward to whomever our nominee is. I hope it’s Hillary Clinton.”

Detractors might hear some mixed messages in those words, but they make perfect sense through the prism of identity politics. Clinton will be strong with women and the black voters in Maryland, just as she was in her crushing victory over Sanders in South Carolina Saturday night. Joining her bid played to Edwards’ brand, aligned her with target voters and demonstrated commitment to female representation in government.

Come late April, the congresswoman hopes the choice squares with the picture she’s painted of herself. It’s a portrait that could come straight from Kim Possible’s theme song, crooned by Afro-Latina pop star Christina Milian: “I’m your basic average girl, and I’m here to save the world.”