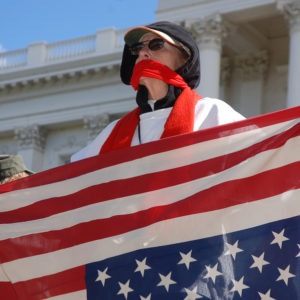 Anything you want, we got it right here in the U.S.A.

Can Silicon Valley’s wizards come up with an AI hologram of the Father of Rock ‘n’ Roll, and run it for president next year?

Nah, not practical. Message would be too positive.

If the “debates” held for the aspirants to the Democratic Party’s presidential nomination are any guide, the 2020 campaign will be a choice between fear and hate.

That grisly assessment might sound hyperbolic, but consider the narratives that will be offered. The incumbent will stick with what’s “worked” so far: Foreigners and illegal aliens are stealing our jobs. China and Mexico are furthering the deindustrialization of America. Tehran is so dangerous, “maximum pressure” must be applied — yes, even if it keeps desperately needed medicines from children.

Execrable stuff, to be sure. But if you’re scoring at home, is it as wretched as the other side’s facile morality play? Institutional racism is the sole reason why any nonwhite person, anywhere in the U.S., suffers in any way. A conspiracy of corporate executives has destroyed the middle class and seeks to make Joe Sixpack and Jane Diet Coke ever poorer, and the Top 1 Percent ever richer. Carbon pollution (generated by the worst industry imaginable, fossil fuels) will destroy the planet in our lifetimes.

What’s most frustrating about the dueling fantasies of the two major political parties is that they stem from fundamental — and quite useful — notions of good and evil that were hardwired into humanity at the start.

According to research by Jonathan Haidt, a brilliant scholar of “morality and emotion” with the Business & Society Program at New York University’s Stern School of Business, there are six “taste buds of the righteous mind.” Trump and his followers place Loyalty (tribalism, cohesion), Authority (order, obedience), and Sanctity (purity, divinity) at the top. Leftists consider Care (protection, compassion) and Fairness (equality, justice) the primary virtues. And these “moral matrices” are held most intensely by the politically active.

Listen to Trump and the pols who seek to replace him just a little, and the differences come into stark relief. From the president’s demonization of foreigners to his nostalgia for a time when manufacturing jobs were easily attainable and everyone respected the flag, he sees his role as a preserver/restorer of something sacred. (America was great, and it needs to be made great again.) Democrats eager to vanquish The Donald see him as an avatar of the inherent unfairness of a land stained by cronyism, cruelty capitalism, and “white privilege.”

Neither perspective is firmly anchored in reality — and the anecdotes and factoids offered as “evidence” to prove the contrasting worldviews are often laughably inaccurate. But the stories, imagery, and rhetoric feed the warring camps’ bases, driving donations, volunteers, and votes.

The way out of the false choice between Team Red and Team Blue’s isn’t the American establishment’s beloved “centrism,” of course. We’ve had quite enough of that warm-and-fuzzy nonsense — e.g., entitlements, Vietnam, corporate welfare, campaign-finance “reform,” Afghanistan, Iraq. (If anything, the greatest problems the republic faces today can be traced back to technocratic elites’ faith in godlike government.) No, the escape hatch can be found in Haidt’s sixth taste bud of moral righteousness: Liberty.

Personal and economic freedom. Independence and autonomy. Openness. Non-zero-sumness. Voluntary exchange. These treasured precepts are the reason why libertarians are repulsed by Trump’s nostalgic nationalism and liberals’ delusive Nanny Statism. They were products of The Enlightenment, and for most of our country’s history, they comprised most Americans’ default setting for government, economics, charity, and education.

Liberty-lovers don’t believe that the America of 1955 was flawless, and that free trade and robust immigration are threats. Neither do they believe that America was unforgivably rotten at the founding, and urgently needs tax dollars to coercively enact cradle-to-grave kindness and consciousness-raising. Libertarians aren’t selling fear. Or hate.

“Moral matrices,” Haidt found, “bind people together and blind them to the coherence, or even existence, of other matrices. This makes it very difficult for people to consider the possibility that there might really be more than one form of moral truth, or more than one valid framework for judging people or running a society.” (Dwelling in media bubbles makes such exploration all but impossible.)

MAGA Madness, “Progressive” Poppycock. Some of us take a hard pass on both. Maybe you should, too.