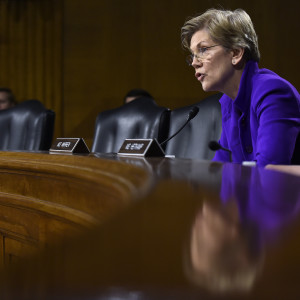 Why Elizabeth Warren’s in No Hurry to Endorse

Apart from the 2,383 delegates needed to nominate a Democratic candidate for president, there’s another vote that Hillary Clinton and Bernie Sanders would both like very much: the endorsement of progressive firebrand Elizabeth Warren.

The Democratic senator from Massachusetts has played coy about backing either the former secretary of State or the Vermont senator, prompting an endless parlor game about when and why. But, as is often the case with Warren, the strategy is hiding right there in the open for those who take a moment to consider a few key political facts.

Warren shoots herself in the foot if she endorses too early. She likes the idea of Clinton being forced to debate the issues Sanders is raising, so similar is she in outlook to the Vermont senator. And — the critical point that the political press often misses — Warren can continue to shape the context in which Democrats make decisions well past that over-covered, over-rated, over-interpreted point in time where she officially endorses anyone.

If you’re a Warren acolyte, either a Massachusetts voter or part of her massive email list, you might be a Sanders or a Clinton supporter. So what, exactly, does Warren gain by calling out one over the other? Nothing. Nothing at all. Her political base is split.

Polling data might not specifically parse how many Warren acolytes support Sanders or Clinton, but it’s easy enough to infer. Take a look at the Massachusetts primary, which Clinton won with slightly more than 50 percent of the vote, about four years after Warren won her Senate seat.

The politics of gender matter. Warren was only the second woman elected to statewide office in Massachusetts, and women who supported Warren in 2012 probably backed Clinton as well. A WBUR poll released on Feb. 26 found Clinton leading by 21 percentage points among female voters. Younger voters, some of whom probably weighed in for their first time in 2012 when Warren was elected, went overwhelmingly for Sanders.

Warren’s public statements on the two candidates have been, depending on your view, carefully calculated or ludicrously contradictory.

She dodged attending a fundraiser for Clinton. She signed a letter in 2013 urging Clinton to run for president in the first place. She’s studiously avoided an endorsement even though every other female Democratic senator is officially for Clinton. But she’s praised Clinton’s statements about financial reform. And she has defended Sanders against criticism from the CEO of Goldman Sachs, Lloyd Blankfein.

The seemingly contradictory stands avoid offending the Warren base while achieving another of the senator’s goals: fostering a debate about issues Warren cares about. Anyone who knows her well will emphasize that she does care intensely about the issues. It’s not all politics to her.

Think for a moment about the commitments Warren has helped wrangle from Clinton — the front-runner for the nomination for most of the race — on the senator’s pet issue of Wall Street reform. Clinton laid out the details of her intentions in an op-ed in The New York Times. In a debate with Sanders, she promised to consult senators on presidential appointments, and mentioned Warren specifically. It’s hard to imagine that kind of promise without a candidate like Sanders to stand on a podium opposite Clinton demanding such.

Finally, Warren doesn’t consider the endorsement moment to be that important.

The traditional concept of an endorsement as understood by political operatives is pretty static. Senator endorses the candidate, preferably early, and the candidate is grateful. The senator’s leverage is now gone, but fret not. Once elected, the victorious candidate returns the favor by giving said senator some of what she wants.

That political transaction depends heavily on the idea that the endorser trusts the candidate to repay what is owed. Warren’s well-known distrust of Hillary Clinton stems from Clinton’s support as a senator for bankruptcy legislation that she opposed as first lady. Warren, an expert on the subject, was delighted to see how the first lady acted, but dismayed when the new senator from New York voted for legislation backed by Wall Street.

An official endorsement won’t be the beginning of the pressure that Warren has exerted to push Clinton leftward, nor will it be the end.

Hillary Clinton can expect Warren to deploy all the same tools to push her cluster of issues around Wall Street, income inequality and corporate power during the general election campaign and after Jan. 20, 2017. There will be tweets. Speeches from the Senate floor. Emails. Maybe a little black magic.

In fact, it’s a good bet that when Warren mounts a platform to join Clinton for a formal endorsement — picture a splashy event in a swing state — the Massachusetts senator offers up some pro-Clinton talking points that also manage to sound (for those versed in “Warren-speak”) more than a bit like a warning to the future Madam President:

“I am delighted to be here to endorse Hillary Clinton for president,” Warren might proclaim.

Translation: You’ve got me on this stage, Secretary Clinton. But really what you’ve done is avail yourself of the opportunity to feel the pressure in person. Listen up.

“I’m delighted that we will continue to talk about the influence of big banks through November,” Warren will say.

Warren-speak: Forget about abandoning the criticism of Wall Street during the general election in the name of moving toward the center. This issue resonates with a broad spectrum of Americans. If you forget, I will remind you.

“It will be great to have a president that listens to other Democrats when she selects her economic team,” we’re likely to hear from the Massachusetts senator.

In other words, I will raise a big honkin’ stink if you send the Senate nominations from the Robert Rubin/Citigroup crowd.

“We have made a lot of progress toward ensuring that the Democrats are responsive to the needs of American families,” Warren will say. “But there’s more to do with Hillary Clinton as president.”

Which means: You may be the nominee, but you don’t run this party. Never forget that.

Will Warren endorse the likely winner — Hillary Clinton — once the front-runner’s primary victory is crystal clear? Surely. But an endorsement isn’t simply a sign of support in one candidate’s fight against her opponents.

It’s a marker of expectations.

Editor’s Note: An earlier version of this article incorrectly stated that Warren was the first woman elected statewide in Massachusetts.