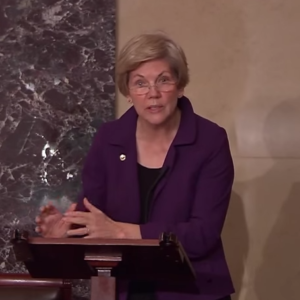 Warren has become a leading progressive figure over the past few years. She has also been an outspoken critic of right-to-work laws. Right-to-work outlaws mandatory union dues or fees as a condition of employment. Warren, a likely Democratic presidential candidate, introduced the bill alongside Rep. Brad Sherman to end right-to-work laws outright.

Federal law currently allows states to decide whether they want to be right-to-work or not. There are 28 states that have enacted the policy. Those opposed argue it is merely an underhanded way to hurt labor unions, while supporters contest it is actually about giving workers a choice.

“Their stated goal is to take jobs from other states by weakening unions and, therefore, lowering wages,” Sherman said in a statement. “Current ‘right-to-work’ laws require unions to represent non-dues-paying employees, thereby creating free riders – people who benefit from the union contract but don’t pay.”

Sherman adds that the free-rider problem makes it harder for unions to organize in a right-to-work state. Labor unions and their supporters have often used the free-rider argument to oppose right-to-work. They are obligated to represent all workers regardless of whether they pay dues once they get voted in as the exclusive representative.

Critics say Sherman overlooks that being an exclusive representative isn’t the only way unions can organize. Member only unions aren’t obligated to represent nonmembers or anyone not paying dues or fees. The downside is they lose monopoly rights which block other labor groups from trying to organize established bargaining units.

“These Senators must value a campaign contribution much more than freedom and flexibility for workers across the country,” Jeremy Adler, communications director for the conservative nonprofit America Rising Squared, told InsideSources. “Sponsoring legislation that would force Americans to give more of their hard-earned money over to Big Labor proves that for these liberals, helping special interest donors is more important than creating jobs and increasing wages for constituents.”

Democratic lawmakers are usually more likely to support mandatory union dues compared to their colleagues on the right. They are also more likely to receive political contributions from unions. The Center for Union Facts (CUF) found in a report Tuesday that labor unions have contributed nearly $765 million to the Democratic Party and liberal special interest groups between 2012 and 2016. That totals 99 percent of their total advocacy budget.

The bill isn’t likely to pass anytime soon with Republicans controlling both houses of Congress and the White House. The GOP has introduced a few pieces of legislation of its own which limits what unions can require employees to do.

Congressional Republicans introduced a bill Feb. 1 aimed at making right-to-work a national policy. President Donald Trump has briefly mentioned his support for it. The U.S. Supreme Court might also take up a case that could end mandatory union dues for all public workers.