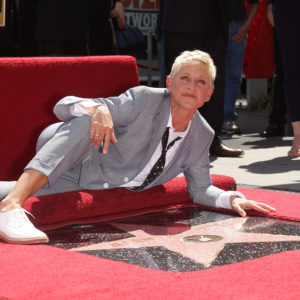 Ellen Degeneres arriving to Walk of Fame on August 03, 2012 in Hollywood.
[IS] Opinions

Call it a Suite Controversy.

A couple of weeks ago, popular daytime talk-show host Ellen DeGeneres was spotted in a skybox suite with former President George W. Bush as the two attended the Green Bay Packers-Dallas Cowboys NFL game at AT&T Stadium in Arlington, Texas.

Video was played incessantly; photos of the pair spread like wildfire. They both seemed merry. However, some viewers weren’t so pleased.

Yes, we saw the sign of the times, as the backlash was intense and swift. Unfortunately, DeGeneres was excoriated by many — especially those of the Hollywood ilk — for frolicking with a so-called warmonger, a homophobic and international criminal.

Rabble-rousers such as actor Mark Ruffalo quickly denounced the gathering, saying he wants Bush brought to justice “for the crimes of the Iraq War.” Others painted Bush as a man trying to burnish his controversial past into a more palatable, biographical image by using his association with DeGeneres essentially as a public-relations prop.

But DeGeneres, to her credit, didn’t retreat from any of this blowback.

Afterward, during the monologue part of her show, she convincingly declared: “I’m friends with George Bush. In fact, I’m friends with a lot of people who don’t share the same beliefs that I have. We’re all different, and I think that we’ve forgotten that that’s OK that we’re all different. Just because I don’t agree with someone on everything doesn’t mean that I’m not going to be friends with them. When I say be kind to one another, I don’t only mean the people that think the same way that you do. I mean be kind to everyone.”

Her studio audience applauded. And Bush’s spokesman, Freddy Ford, told Fox News Channel: “President and Mrs. Bush really enjoyed being with Ellen and (wife) Portia (de Rossi) and appreciated Ellen’s comments about respecting one another. They respect her.”

Throughout this ordeal, Ellen is the epitome of surviving The Chase, which occurs when one is trying to outrun the Thought Police.

On background, Bush is a usual recipient of incoming fire from critics, but what about Barack Obama. Ten days before Donald Trump’s inauguration, VOX Media published this:

“Using drones to kill American citizens (in targeting suspected terrorists abroad) without trial, collecting the email and phone records of millions of Americans on a daily basis, and grabbing militants off the streets of foreign cities and imprisoning them indefinitely — these are all powers that Obama has bequeathed to his successor.”

Yet, Obama maintains that Teflon Mystique — far from the “madding crowd.”

Still, we’ve seen this Ellen movie before. In 2019, we have The Suite; well, in 1972, there was The Hug. That was when entertainer Sammy Davis Jr., a black Democrat, appeared with President Richard Nixon in Miami at the Republican Youth Rally, mere days after he was nominated for re-election. During the event, Davis, unprompted, hugged Nixon, an embrace that seemingly surprised even the Republican president.

Davis’ relationship with many black folk was never the same after that episode. Sammy learned this: Hug a Nixon at your own risk.

Later, Davis basically told Ebony magazine that he wasn’t a traitor. Instead, Davis, in effect, related that he was trying to make a positive difference by working from inside Nixon’s World.

All of this begs the question: Are we a socializing stock or simply a herd of public proclamations constantly on display? In other words, during these polarizing times, are we ONLY defined by political leanings, gender identities, casual associations and Twitter postings? Meaning conservatives can only socialize with conservatives and liberals can only mingle with other liberals to escape harsh scrutiny.

Yesterday’s Sammy Davis Jr. is today’s Jim Brown or Steve Harvey or Kanye West, the rich rapper who last week made a surprise appearance at Howard University’s Homecoming in Washington, in which students were informed via email at 6 o’clock that morning. West performed outdoors with a gospel choir, drawing cheers from some but scorn from others.

As one Twitter user posted, “If you’re not intelligent enough to recognize that Kanye West is exploiting black Christian culture AND Howard University to rebrand from supporting a racist, xenophobic con artist …  please stay away from me.”

Brown, Harvey and West either posed for photos with or offered public admiration for Donald Trump after highly publicized visits with him in New York and/or at the White House. The bottom line: When cavorting with Trump, as a black person, beware of the catcalls. As in being called an “Uncle Tom” or “coon” or “traitor” or “house n-word.”

So, here we are in these tribal times, when the average person must decide, “Well, I like him or her as an entertainer, but I can’t show it publicly because of politics.”

And Hollywood appears to be in such a state that thespians must forever be concerned about with whom they are seen in public or offer support for out of fear of being blackballed or name-shamed? Sort of like modern-day McCarthyism.

Remember, when DeGeneres responded to the fierce backlash leveled at her, actresses such as Reese Witherspoon came to her defense with effusive praise. Witherspoon Tweeted, “Thank you for this important reminder, Ellen! …”

Then, the Tweet was gone as Witherspoon deleted it.

The Thought Police was hot on her tail.