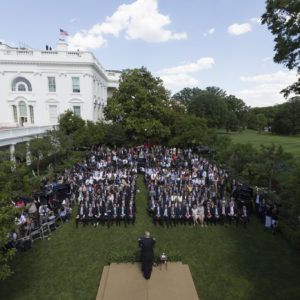 The Emperor Has No Clothes

President Trump and his enablers are weakening U.S. leadership around the world in an unprecedented fashion. The only real debate on the issue is whether Trump is profoundly damaging America’s national interest out of breathtaking incompetence, inherent malice, or both.

Consider the facts. In less than six months, Trump has tried at every turn to praise the vicious Russian autocrat President Vladimir Putin while simultaneously denigrating NATO — the strategic alliance that has been the bulwark of trans-Atlantic security for more than 50 years.

Despite the fact that every U.S. intelligence agency agrees that Russia was behind the attack on the U.S. presidential election system last year, Trump has taken no steps to help states better defend themselves against such cyber-attacks in the future — and instead, often pretends that the attacks never happened. He has gone so far as to spill sensitive battlefield information to the Russian ambassador, and in the same meeting, mocked the widely respected former FBI director as a “nut job.”

Under Trump, the State Department has been left to almost wither on the vine. He has proposed 30 percent cuts to its budget, Secretary of State Rex Tillerson has not named a single head of any of the department’s regional bureaus, and a number of officials from foreign governments no longer try to contact the administration through the State Department because no one there returns their calls.

Trump’s first national security adviser served the shortest tenure in the history of the United States before resigning in disgrace for his potentially criminal failure to disclose his payments from foreign governments, including Russia. Gen. Michael Flynn also may have delayed a key offensive against ISIS at a time when he was on the payroll of the Turkish government and Turkey was opposed to Kurdish groups playing a role in the assault on the ISIS stronghold.

The administration has signaled its intention to withdraw from the Paris climate change agreement, a move that everyone from Exxon Mobil to Elon Musk has decried as counter-productive not only for the environment but to America’s economic and strategic interests. To that point, Trump might also want to check in with his own secretary of defense, Jim Mattis, who has said that climate change is not only real but “impacting stability in areas of the world where our troops are operating today.”

On foreign policy, Trump has been wildly erratic, with the only constant a desire to further enrich himself and his family. He wildly shifted his position on China’s relationship with Taiwan, and lo and behold, the very next day China granted the Trump Organization a series of trademarks it had been unsuccessfully seeking for more than a decade. One of the first purchasers of property in Trump Tower after the election was a Chinese-American businesswoman with shadowy links to a front group for Chinese military intelligence.

In a simmering dispute between Saudi Arabia and Qatar, Trump sided completely with Saudi Arabia and accused Qatar of being a major funder for terrorism — somehow managing to forget that the most important U.S. military base in the region happens to be in Qatar and that Saudi Arabia itself has long been linked to funding religious extremism at the highest levels.

Why would Trump make such a bizarre move? Perhaps because the Saudis have been pouring investments into the real estate firm of Trump’s son-in-law, Jared Kushner.

And while foreign policy is not a popularity contest, the world’s view of America with Trump at the helm has plummeted. In a recent Pew survey across 37 countries, a median of just 22 percent of citizens had confidence in Trump to do the right thing when it comes to international affairs. How can America lead if no one follows? Of course, there was one very notable country where the image of America improved under Trump — and that would be Russia.

And when it comes to America’s leadership in the world, we shouldn’t be surprised Trump is such an unmitigated disaster. Can America lead the world in science with a president who doesn’t believe in climate change and wants to gut institutions like the National Institutes of Health, NASA and the Environmental Protection Agency?

Can America lead the world economically with a president who doesn’t believe in trade, and who wants to impose tariffs that would likely spark trade wars and cost America thousands of export jobs?

Can America inspire a global move toward democracy and free markets with a president who loves despots and hates a free press?

The answers are self-evident.

John Norris is a senior fellow at the Center for American Progress and author of “Mary McGrory: The Trailblazing Columnist Who Stood Washington on Its Head.”