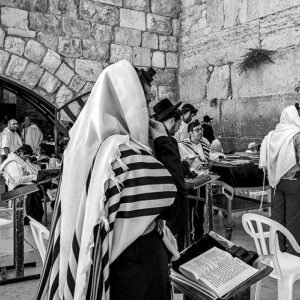 The air over Jerusalem is saturated with prayers

Those words, by the Israeli poet Yehuda Amichai, testify to the rich and fraught history of Jerusalem. Sacred and singular, a symbol as much as a place, it has been coveted, conquered, and reconquered. Its layers of history can quite literally be excavated like an archaeological dig.

One thread, however, traces to practically the origin of the ancient city: Its centrality to the Jewish people. Until recently, this self-evident truth would have prompted no contention. In early Jewish texts, Jerusalem is “the light of the world,” the heart of Jews’ collective consciousness. While Christians and Muslims have cherished Jerusalem, many would make Rome or Mecca a focal point of their global faiths. For Jews, there has only been Jerusalem.

It is toward there that, over the course of their exile, Jews have directed their prayers. It is Jerusalem whose memory has been invoked in Jewish milestone events, whether marriage or bereavement. Jewish holidays commemorate yearly pilgrimages to Jerusalem. Even in the diaspora, sizable Jewish communities were identified with the city: Amsterdam was once called “Jerusalem of the West,” Vilnius was “Jerusalem of the North” and Thessaloniki was “Jerusalem of the Balkans.”

Jerusalem was established by King David as his capital 3,000 years ago. And it is the only city to have been the State of Israel’s seat of government. Few nations have roots as deep.

On Dec. 1, 2021, however, the United Nations again repeated a ritual that represents a modern spin on efforts to deny the roots, rights, and very legitimacy of the Jewish people in their sole ancestral homeland.

The U.N. General Assembly passed some 15 resolutions attacking Israel in December – more than those targeting all other 192 members states. That bombardment reflects not the actual record of Israel – the only pluralistic democracy in the Middle East – but rather the combined political weight of its adversaries.

Among the most odious motions is the one adopted on Jerusalem.

The resolution condemns Israel, the country that has not just championed religious freedom more than any other in the region, but maintained Islamic administration of the Temple Mount – the single holiest place in Judaism – and restricted Jews’ own ability to pray there.

If the condemnation weren’t unjust enough, the text again erases Jewish history by referring to the Temple Mount exclusively by its later Arabic designation, Haram al-Sharif. Other iterations have belittled Jews’ connection to the epicenter of their civilization by consigning the site’s long-standard name to parentheses.

In contrast with Israel – where Arabic signage is ubiquitous, Christian and other minorities have grown continually, and hijabs mix with skullcaps in universities, hospitals, and parliament – Palestinian leaders have exported an endemic denial of Jewish history by referring at the U.N. only to a Muslim and Christian heritage in Jerusalem.

Palestinian leader Yasser Arafat famously denied the very existence in Jerusalem of the Jewish temples. His successor, Mahmoud Abbas, said of the mosque on the Temple Mount and of Jews: “Al-Aqsa is ours and so is the Church of the Holy Sepulcher. They have no right to desecrate them with their filthy feet.”

But classical Islam, so closely connected with Judaism, never denied Jews’ place in the region – and Christian history is utterly inseparable from Jewish history in the holy city. It is Christian scripture that affirms that Jesus, a Jew, walked the Temple Mount even before the existence of the now-distinct religions.

The temple’s menorah is commemorated not only in Jewish homes each Hanukkah but on the Arch of Titus in Rome – which celebrates Jerusalem’s destruction and despoiling in the year 70.

Over recent years, more and more countries have said they will no longer tolerate denial of Jewish and Christian ties to holy places. But too much vacillation remains. Although Britain, Germany, and the Netherlands opposed outright a 2016 United Nations Educational, Scientific and Cultural Organization resolution lambasted for erasing the name “Temple Mount,” all three merely abstained on the General Assembly resolution guilty of the same offense.

At the U.N., because of its structural realities, there truly is no limit to Palestinian charges that not only defame but delegitimize Israel: whether “ethnic cleansing,” “Judaizing Jerusalem” or “apartheid.” The cynical linking of racism to Zionism – the movement to restore Jews’ national home in Israel, with Jerusalem, or Zion, at its heart – has been a longstanding tactic of Palestinian representatives seeking to challenge Israel’s existence altogether.

It is now time for all countries to take a stand for honesty, decency, and diversity by rejecting efforts to whitewash Jews’ roots in the land that gave them their very identity.

Daniel S. Mariaschin is CEO of B’nai B’rith International. He wrote this for InsideSources.com.

David J. Michaels is director of United Nations and Intercommunal Affairs for B’nai B’rith. He wrote this for InsideSources.com.