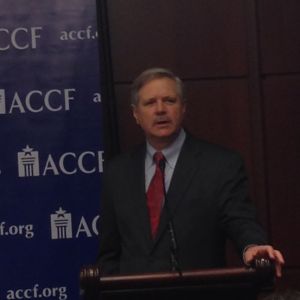 An event on Capitol Hill Wednesday focused attention on growing bipartisan calls for ending the ban on crude oil exports.

Sen. John Hoeven (R-ND) keynoted the forum, which was hosted by the American Council for Capital Formation (ACCF), a small business advocacy group. Hoeven detailed the history of the ban on exports, which originated in the 1970s in reaction to global events and the concern of limited energy resources.

“If we want to keep growing our energy industry in this country, if we want to keep producing more oil and gas, we have got to help our industries be competitive in the world economy,” said Hoeven, who detailed how North Dakota’s economy had grown as energy companies hired for new middle-class jobs.

Matthew Slaughter, the incoming dean of the Tuck School of Business at Dartmouth College, expanded on this, noting the growth North Dakota has had in per capita income. He explained that because drilling in North Dakota has largely been built around new technologies, it hasn’t been big energy companies that kicked off this boom, instead it has been entrepreneurs and small businesses.

The energy industry invests heavily in America and this leads to job growth, explained Will Marshall, president of the Progressive Policy Institute (PPI). Marshall said that along with the tech industry, the energy industry has a tremendous influence through its investments in America’s economy. ACCF’s Margo Thorning, who moderated the event, added that research has shown for every $1 billion of capital investment, 20,000 jobs are created.

Several speakers at the event took note of Wednesday’s Wall Street Journal. Former Secretary of Defense Leon Panetta, who served under President Obama, and Stephen Hadley, who was National Security Advisor to President George W. Bush, co-wrote an op-ed making a case to end the export ban. They state: “Too often foreign-policy debates in America focus on issues such as how much military power should be deployed to the Middle East, whether the U.S. should provide arms to the Ukrainians, or what tougher economic sanctions should be imposed on Iran. Ignored is a powerful, nonlethal tool: America’s abundance of oil and natural gas.”

Takashi Kume, special advisor for the Japanese Ministry of Economy, Trade and Industry, sat on Wednesday’s panel, explaining that Japan must rely fully on imports for its traditional energy needs. The country’s supply of oil comes mostly from Iran and Russia. It would be advantageous to Japan and to the United States, he said, to promote trade among close allies rather than allowing America’s geopolitical foes to dominate the international energy market.

A question at the event addressed climate change, an issue often raised in debate over lifting the export ban. PPI’s Marshall, a Democrat, said, “There’s no environmental reason to differentiate oil produced for domestic consumption from oil produced for foreign consumption.” Marshall argued there should be a discussion of how to reduce greenhouse gases along with this debate, and part of the delay in passing energy legislation is likely that the Obama administration is still hoping to make some trades on climate issues.

There are ongoing bipartisan efforts in the House and Senate to end the crude export ban. Sens. Lisa Murkowski (R-AK) and Heidi Heitkamp (D-ND), who were joined by Hoeven and ten other senators, introduced a bill last week to end the ban.