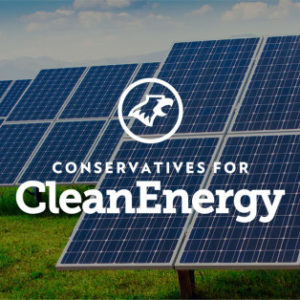 Conservatives for Clean Energy seems like a right-leaning environmental group. After all, it has conservative in the name and its website praises “choice and competition” for providing benefits for consumers. Its website explains that the group “educates the public on the benefits of clean and renewable energy sources.” But is the group in fact more green than red? Despite its free market trappings, Conservatives for Clean Energy has financial ties to major left-leaning environmentalist groups.

Prior to founding the group, Shumaker had been long involved in North Carolina Republican politics. In 2014, Shumaker was a consultant for Thom Tillis, who was then running for the Senate. He also worked for GOP Sen. Richard Burr, and had a reputation in North Carolina as a data guy.

Stewart has also worked many state campaigns. Most notably, through his private consulting firm, he worked for Reps. Patrick McHenry and Richard Hudson, and served as McHenry’s chief of staff. Mark Fleming, the current President and CEO of Conservatives for Clean Energy, also worked for McHenry.

Despite its Republican founders, over the course of its existence, Conservatives for Clean Energy has received funding from several big-name liberal donors, including the Rockefeller family and the Energy Foundation, itself a pass-through group for many leading liberal donors.

In 2015, Conservatives for Clean Energy received a one-time, $50,000 grant from the Rockefeller Brothers Fund in order to “advance solutions to climate change” as part of the fund’s sustainable development program. The program itself is described as seeking “ecologically based, economically sound, socially just, [and] culturally appropriate” global stewardship. In practice, this means that the group frequently supports green energy to the extent of resisting fossil fuel development.

Around that time, Valerie Rockefeller Wayne, the chair of the fund, explained in an interview that the group had “a moral obligation,” to divest from fossil fuels and to fight their continued use.

According to the Civitas Institute, a nonpartisan conservative nonprofit organization that seeks to educate North Carolina voters about the funding behind candidates and campaigns, “Conservatives for Clean Energy is the monetary connection between liberal environmental policy and Republican consultants and lobbyists.”

When asked by InsideSources about the donations, Fleming said only that his group was “happy to work with, and get support from, any organization that sees the economic and job creation benefits of clean energy.”

With the start of the Trump administration, the group is seeking to expand its influence. Soon after the inauguration, the group moved to expand its operations into Virginia. (It has long term goals of expanding into other states, but does not have firm plans yet.) In an interview in January, Fleming described how the group hoped to “educate the public on the benefits of clean and renewable energy sources,” stressing that support for clean energy was growing in both North Carolina and Virginia. His support for free market policies was less clear.

Fleming explained that, in his opinion, “there is no free market in energy,” but instead each state has “a regulated monopoly.” He defended government involvement in clean energy, by arguing that government also supported the fossil fuel industry.

“The only thing bringing competition is solar and wind and other clean energy technology,” he said, “so we are helping to create competition in the energy market.”