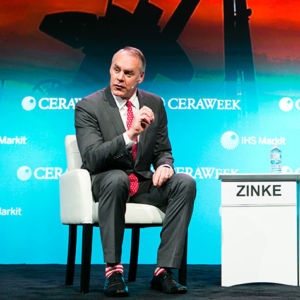 Energy Industry Leaders Predict a Future of Evolution, Not Revolution

What will power the future? According to industry leaders and experts meeting at the CERAWeek conference in Houston, TX this week, the answer is both innovation and continuation, evolution and not revolution. CERA is an energy conference organized each year by IHS Markit, information and insights company. Each year, it attracts major industry and policy figures; this year’s speakers included Energy Secretary Rick Perry, OPEC Secretary General Mohammad Sanusi Barkindo, as well as the CEOs of General Motors, ConocoPhillips, Duke Energy, and others. While issues like alternative energy and large scale batteries were topics of discussion, as the energy industry looks forward, it is still planning for a future largely dominated by oil and natural gas.

“History shows that shifts in the global energy system are evolutionary—not revolutionary. That means that “energy transition” will remain a buzzword not just for years, but for decades,” said Atul Arya, chief energy strategist at IHS.

The energy industry expects that while alternative energy will continue to develop over the coming decades, traditional fossil fuels will produce the bulk of the world’s energy for the foreseeable future. Instead of rapid revolutionary changes to the energy mix, they instead expect to see shifts in technology and approach.

One such change could also be the broader adoption of fracking technology. Over the past decade, fracking has become almost synonymous with the growth of American domestic production, since this was where much of the technology was first developed and adopted. However, other regions of the world with rich shale deposits are beginning to bring this technology into play, opening up even more areas of supply.

On a market level, this means that energy companies are betting on a bullish market. Although world markets have been dealing with a a glut of oil for several years, a reality that has kept prices low, CERA attendees believed that demand growth will continue to eat away at the slack.

“There is uncertainty, despite the optimism, about where the industry is going,” said Michael Stoppard, ISH chief strategist for global gas and energy.

What is increasingly a focus of the CERA conference is the shift in where oil is coming from. One of the biggest headlines to emerge from the conference is the continued dominance of American fracking. According to Fatih Birol, head of the International Energy Agency, the U.S. is expected to continue its rapid expansion of energy production. By 2023, he said, the U.S. would likely be the largest fossil fuel supplier in the world, a shift he said would exceed the expansion Saudi Arabia saw in the 1960s and 1970s.

“Non-OPEC supply growth is very, very strong, which will change a lot of parameters of the oil market in the next years to come,” Birol said. “We are going to see a major second wave of U.S. shale production coming.”

Although electric vehicles have been the subject of many political discussions, industry figures believe that they are unlikely change the industry overnight. Saying that they were not a “silver bullet,” BP CEO Bob Dudley, expressed the feelings of many at the conference when he explained that coal, oil, and natural gas would remain part of the fuel mix for decades. Even the rate at which oil use might decline in the future is, at this point, uncertain.

“Many wrongly believe that it is a simple matter of electric vehicles quickly and smoothly replacing the internal combustion engine,” Saudi Aramco CEO Amin Nasser said.

He stressed that the reality was more complicated. Not only is electric car technology still continuing to develop to the stage where it might replace the internal combustion energy, but at this point, much of the power these cars would run on is generated by burning coal. As countries like China and India continue to electrify, coal plants are providing the majority of the growth. With expected lifespans of several decades, these plants are unlikely to close in the near future.

In order for electric cars to be cleaner, they would need to be able to ensure a clean power generation mix, something which is simply beyond the reach of many areas of the world at this point.

As CERA Week moves into its final day on Friday, the surprise might be how much the future of energy sounds like the present. A decade ago, the American fracking boom reshaped energy markets in ways that few would have predicted. A similar technological revolution could take place, in fairness. According to energy industry figures, though, shifts are likely to be more gradual, continuing the poduction increases we have already seen and developing new ways of making traditional vehicles cleaner.