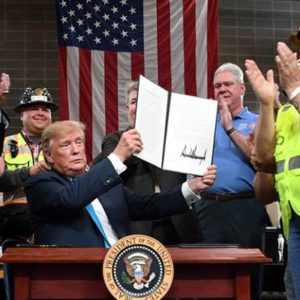 Long a friend of the energy industry, President Donald Trump issued a set of Executive Orders to streamline Federal permitting processes related to energy development. Speaking before safety-vest wearing members of the International Union of Operating Engineers, Trump praised the success of the energy industry and promised to help expedite a permitting process that has stymied new infrastructure development.

“Nobody in the world can do what you folks do and in a few moments, I’m going to make it easier for you,” he continued, referring to the two executive orders he signed today to “continue the revival of the American energy industry.” 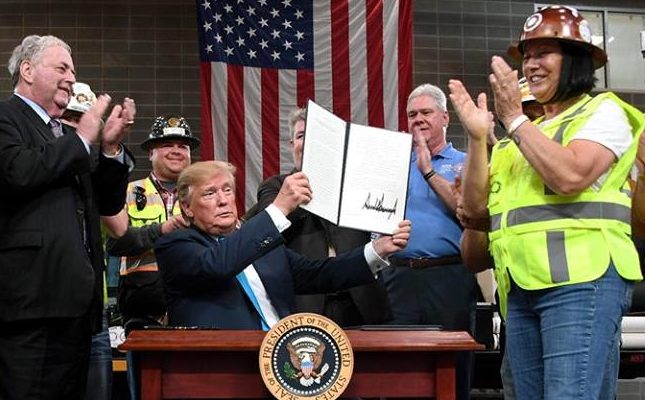 Donald Trump at the International Union of Operating Engineers International Training and Education Center in Crosby, Texas on April 10, 2019 signing two executive orders intended to accelerate the approval of energy infrastructure projects in the United States.

The first of the Executive Orders expedites the approval process for roads and pipelines near the border. Under the new rule, it will take no more than 60 days to approve roads and pipelines and final decision authority will rest with the president, rather than any executive agency or bureaucracy. Previously, the Secretary of State issued approval for cross-border pipelines.

“My action today will cut through destructive permitting delays and denials,” Trump explained, a line that drew cheers from his audience. “You know about that? You know about delays, where it takes you twenty years to get a permit? Those days are gone.”

This order was a jab at New York state, which has been blocking the Constitution pipeline with water quality concerns for years. New York has refused to issue a permit for the project, despite federal approval of the pipeline.

Trump’s speech highlighted the soaring energy costs in New England, attributing them to state policies that have obstructed the construction of new pipelines.  “Too often badly needed energy infrastructure is being held back by special interest groups, entrenched bureaucracies, and radical activists,” he said.

Both the energy industry and organized labor greeted the news with enthusiasm. The Independent Petroleum Association of America specifically praised the order addressing the EPA’s enforcement of the Clean Water Act, saying that a 2010 rule change allowed states “to inhibit projects that are clearly in interstate commerce.” Meanwhile, unions expressed their support for a move that will doubtless create more jobs.

“The executive order announced today is a win for natural gas, the bridge fuel that will get our nation to a renewable energy future. Too often the regulatory process at the state level is manipulated by zealots who are waging a project-by-project war against natural gas, throwing thousands of laborers out of work in the process,” said Dennis L. Martire, vice president and regional manager of the Laborers’ International Union of North America (LIUNA) Mid-Atlantic Region .

On their own, the executive orders are not likely to spark the construction of a pipeline that would not otherwise have been proposed. However, the president’s announcement is a sign that he considers energy development a key priority, says Dan Kish, senior vice president for policy at the American Energy Alliance.

“The entire government is moving in one direction under the president who has set the tone,” Kish told InsideSources, explaining that speeches like Wednesday’s help to reiterate to the federal bureaucracy the president’s priorities. This will further influence how administrative agencies apply federal regulations.

“In the case of Trump, what you’re going to get is, ‘what are the ways to make the president happy?’ [And that] is to do something that relieves a burden on the oil and gas industry,” said Kish. “That’s the important thrust of this whole thing. It’s that he continues to go back to the well and to say that this works for the United States and for our national security.”

The order is likely to face a challenge in court from state governors opposed to Trump’s energy priorities. In fact, New York Gov. Andrew Cuomo (D), whose state was called out by Trump during his speech, fired back immediately with a statement of his own calling the order a “gross overreach of federal authority.”

“States must have a role in the process for siting energy infrastructure like pipelines, and any efforts to curb this right to protect our residents will be fought tooth and nail,” he said.

“Especially at a time when the federal government has abdicated its responsibility to protect our environment and public health, states like New York are on the front lines protecting our clean water and the public health.”