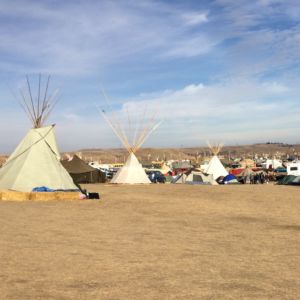 A Year After Standing Rock, It’s Clear That Environmental Protest Camps Are Ineffective

On Wednesday, the Sabal Trail pipeline came online, transporting natural gas 515 miles through Alabama and Georgia to power generators in Florida. The opening signaled the end of the Crystal Water Camp, a protest site that struggled to attract more than a few dozen consistent protesters, despite recruiting at the Sacred Stones camp last summer. According to some, Sabal Trail would become the next Standing Rock, an environmental protest that would grab the nation’s attention and spark a serious discussion about water contamination. Instead, it became another instance where an environmental protest camp attracted media attention but ultimately failed to stop construction.

The Sacred Stones protest camp showed a new direction for environmental protests. Connecting Native American religious beliefs to environmentalist concerns about oil spills and fossil fuels, it used the protest camp structure to unite supporters. Throughout the summer, protesters cycled in and out, some participating in Native American prayer ceremonies, others assisting to run the protest camp or engaging more directly with law enforcement and pipeline construction workers.

The protests were highly successful in raising awareness of the existence of the pipeline. More than one million people “checked in” on Facebook in a low-effort show of support, based off of a rumor that local law enforcement was monitoring social media in an attempt to predict protesters’ movements. Far fewer showed up in person, though at their peak, the camps housed some 10,000 people. The Morton County Sheriff’s Office reported that 95 percent of those arrested in connection with the protests were not from North Dakota. Most of the arrested protesters were from California. In addition, thousands of supporters donated money, giving the protest camps more than $3 million in donations.

Over the course of the summer, the camps became the largest protest in American history. (Prior to this, their closest parallel was likely Camp Casey, where anti-war protester Cindy Sheehan spent three weeks outside of Crawford, Texas to protest the Iraq War.)

Unlike previous environmental protests, these camps did not try to directly engage with construction equipment. Instead, they occupied a disputed section of land, where the Army Corps of Engineers needed to grant an easement in order for construction to continue, and attempted to persuade politicians and business figures to change their minds. Despite the media attention and millions of dollars in donations, the camps failed to achieve their objective. After months of legal wrangling, the Army Corps of Engineers issued the necessary permit in January.

By then, similar protests had already sprouted up across the country. As winter approached and the North Dakota camps emptied out, Standing Rock posted a list of 10 indigenous and environmental protests in need of support. Several months later, two of the pipelines are in operation and the other protests have so far failed to gain widespread support.

First on the list was the Trans-Pecos pipeline. The Trans-Pecos Pipeline went into service on March 31, 2017, carrying fracked natural gas through Texas into Mexico. For several months, the pipeline construction site had been the site of the Two Rivers protest camp. That camp closed in December when it became clear that the pipeline would be completed as planned, even as protesters tried to chain themselves to construction equipment.

“Upon consulting with and gaining the full support of the local communities we will decide if and when to open a new camp,” the group posted on its Facebook page. “At that time we will notify all communities, water protectors and supporters of our intent to open a camp and include details of the location and opening date. Until then, we will support all other camps to the best of our ability.”

The Sabal Trail pipeline, which opened today, was also featured. In January, the protest was able to rally around 150 people for direct action protest training for specific weekends. After a protester was shot and killed by police in February after damaging a section of pipeline, the camp looked like it might become the site of violent confrontation between protesters and police. Thankfully, this was not the case.

The protests ended not with a bang, but a whimper in June, at a demonstration outside a pipeline compressor station near Orlando. Protesters described how “there was no civil disobedience occurring and minimal confrontation,” although three arrests did result.

The culture of the resistance camp, which had sustained itself for months in North Dakota, was more difficult to cultivate elsewhere. Subsequent camps have failed to reach even a tenth of the size of Sacred Stones and frequently have dissolved after disputes with local zoning boards.

In Pennsylvania, protesters in Lancaster County opted to disband their round-the-clock encampment at a farm in March since construction would not start until the summer. Previously, roughly 100 protesters had butted heads with the local zoning board, which did not approve of their staying in a local barn. On Tuesday, the group dedicated a prayer chapel in the center of the proposed pipeline path as an act of protest. However, so far, the Atlantic Sunrise pipeline has managed to negotiate access rights from all but seven landowners in the area.

Over time, the protests are beginning to blend together. In Oklahoma, opposition to the Diamond Pipeline has morphed into resistance of the Plains Pipeline. Protesters did start a small camp, where, Native Americans gathered for prayer services in late June. Still, construction work has continued without major impediment.

Despite their failure to halt the construction of any pipelines so far, protesters are still hanging on to the protest camp model. In Louisiana, where the Bayou Bridge pipeline would connect oil shipped through the DAPL pipeline to refineries near the gulf, protesters launched a new camp last week. The floating camp is comprised of indigenous structures and art pieces built atop large rafts. The group is currently collecting donations of money and supplies as it hopes to expand the camp.

“A camp is basically a tool in order to pool people together in a heartfelt, prayerful way and build community,” said Cherri Foytlin, with Bold Louisiana, an environmental advocacy group.. “We want to support the communities that would be affected by this pipeline should it come through.”

However, the main hold up for construction of the pipeline has been legal challenges. Environmental groups and some area residents are suing to prevent the company from obtaining necessary permits. Some of these permits have already been granted by the state of Louisiana and are being challenged in court.

Despite the questionable efficacy of protest camps, even today, their legacy continues. In northern Minnesota, Enbridge Energy is hoping to build a new pipeline to replace the aging Enbridge 3 line. Already, Winona LaDuke, an environmental activist and member of the White Earth Ojibwe tribe, is threatening another protest camp if the state chooses to grant a permit. Like the protests before, the attempted resistance would come after several overtures from the state government to area tribal governments.

Protesters have also planned a canoe trip in August from the headwaters of the Mississippi to Big Sandy Lake, the site of a 19th century massacre of Ojibwe, and are asking for donations of canoes and equipment.

So far, none of the pipeline protest camps have succeeded in stopping infrastructure construction. Perhaps this time will be the charm.