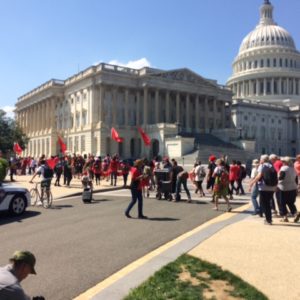 On the cusp of his 100th day in office, the Trump administration was faced with another protest this week. On Friday afternoon, members of several Native American and environmentalist groups gathered on the Capitol lawn wearing red t-shirts to symbolize the red line that corporations and governments cannot cross if they are serious about stopping climate change. The event was organized by It Takes Roots, a collaboration between  Grassroots Global Justice Alliance, Climate Justice Alliance, Indigenous Environmental Network, and Right to the City Alliance and was characterized as a non-violent direct action.

Organizers stressed that the event was strictly non-violent with a goal of demonstrating to lawmakers the importance of respecting minority rights and the environment.

Puja Dahal, one of two representatives from the Asian Pacific Environmental Network, who came from California for the march, told InsideSources that she was concerned about Trump’s recent executive orders relaxing clean air regulations.

Dahal explained that she is from Richmond, California, near where a Chevron refinery exploded in 2012. She says that APEN is one of the groups representing “frontline communities” like hers, which were negatively affected by the fossil fuel industry.

“I am here to represent the stories of my community,” she told InsideSources. “After the explosion, Chevron provided scholarships for high school students in nearby towns. They are taking away our lives and trying to answer with money.”

Although they came from many different places, the protest members emphasized that they were all part of the same movement.

“We’re all here and we’re all fighting for our rights,” said Kandi Mossett, of the Indigenous Environmental Network. Mossett was one of the organizers of the event. “The red line shows how we are all connected. We are the red lines, and we will not take this abuse anymore.”

For the organizers of the event, the red line was both a set of standards that should not be crossed and a tie that binds the various groups together. Although the organizers represented a variety of causes, such as Black Lives Matter, The theme of inter-connectivity was reiterated by several of the speakers and also group members. For them, issues like pacifism, climate change, and minority rights were all part of the same larger struggle.

“The U.S. military is one of the biggest polluters in the world,” said Michael Marceau, vice president of Veterans for Peace. For Marceau and other members of his group, peace not only saves lives, it protects the environment.

“Non-violent direct action is getting much bigger,” said Mossett, who said that actions like Friday’s red line march “show the strength in our diversity.”

Mossett and other organizers say that their focus is not on changing minds on Capitol Hill, but rather showing people the harms of extraction and the dumping of wastes generated from mineral extraction. Although many people first heard of the climate justice movement after its involvement in the Dakota Access Pipeline Protests, the organizers of Friday’s event emphasized that the movement began in the 1990s. Since then it has been working to protect minority communities and the environment, organizers say. 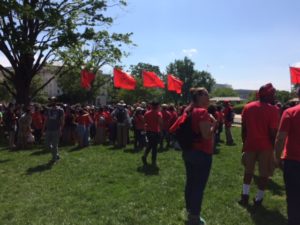 The group assembled on the House lawn for a brief rally involving speakers from LGBT, native rights, and other groups. Periodically, the group was led in chants of “black lives they matter here, say no to Trump and fear.”

Shortly after 3 pm, the group organized itself into ranks for the march to the White House. The protesters marked in blocks, each representing communities and interests impacted, including indigenous peoples, the Appalachians, veterans, youth, food sovereignty, gender justice/LGBTQI, and immigrants. The march was accompanied by the sounds of drums and periodic chanting in English, Spanish, and several native american languages.