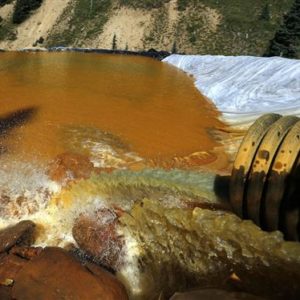 When the EPA Causes Devastating Pollution, It Refuses to Pay for Cleanup

Last August, the Animas River in southern Colorado and northern New Mexico turned a vile shade of yellow, after the EPA accidentally released 3 million gallons of water contaminated with mining byproducts into the water. The spill was the largest environmental disaster in 2015, but so far it seems that the EPA has managed to dodge legal responsibility for the massive spill. Now, out of frustration with the lack of response, three states and several Native American tribes have filed lawsuits seeking to force the agency to cover cleanup costs.

Early in December, the Navajo Tribe filed a suit under Federal Tort claims asking for more than $160 million dollars in damages. The tribe’s reservation abuts the river and suffered when heavy metals and toxic mining waste from the Gold King Mine near Silverton, Colo. were released into the water after a botched EPA cleanup project.

“In particular, it has impaired our ability to maintain the cultural, ceremonial and spiritual practices that undergird the Navajo way of life. Through this claim and our corresponding lawsuit, we are demanding that the U.S. government finally provide the Navajo Nation relief,” said Navajo Nation Attorney General Ethel Branch in a press release.

The tribe is only one of a number of communities seeking federal relief to help cover the costs of cleaning the massive spill and treating drinking water during the contamination period.

Earlier this month, the EPA agreed to pay $4.5 million to state, local and tribal governments to help cover emergency response costs related to the spill. The EPA denied an additional $20.4 million in other requests for past and future expenses related to the spill. The decision involved two different Native American tribes, as well as more than a dozen state and local agencies. On Monday, two Colorado lawmakers pressed the EPA to pay the remainder of the money, saying that a law passed earlier in December had removed the legal obstacles that the agency had cited.

Among the costs rejected by the EPA included over $250,000 spent by the Navajo tribe to haul drinking water in to replace supplies that had been taken from the downstream San Juan River. The EPA agreed to pay for the transport of water through early September 2015, but argued that by that point, water quality had returned to pre-spill levels.

The EPA has refused to pay any costs incurred after October 31, 2015, when it closed its incident command center. However, area communities argue that the costs of cleanup and observation continued to accumulate even after that date.

Still, clean up and water treatment are only part of the costs of the spill. The potentially toxic yellow waters halted watersports altogether and tourism in the area suffered. As area cities, including Durango, Colo., stopped pumping drinking water from the river, nearby residential wells also suffered contamination. In an effort to prevent the contamination from spreading, farmers stopped using river water for irrigation. These lost revenues so far have not been covered by the reimbursements offered by the EPA.

The state of New Mexico also sued the EPA for full compensation for environmental and economic damages related to the spill and Utah, which also suffered contamination, is considering a lawsuit of its own.

“The state of New Mexico looks forward to the swift adjudication of this matter so that the numerous farmers, small businesses and New Mexican families who have been damaged by this environmental disaster can be made whole,” said attorney general spokesman Mark Pino.

The lawsuits don’t stop there though. In June, the state of New Mexico sued the state of Colorado, arguing that Colorado should be held responsible for the spill as well as for toxic drainage from other mines. That case was sent to the Supreme Court in November. The Court in turn has asked for the Obama administration’s views on the lawsuit, requesting that the federal solicitor general file a brief on the case. In disputes between states, such a request is frequently a necessary step before the court hears the case.

The EPA has previously demonstrated its willingness to play by its own set of rules. In mid-October, the U.S. Attorney’s Office decided not to prosecute the EPA employee responsible for the spill. At the time, three ranking House Republicans wrote to the Justice Department, criticizing the decision.

The Members of Congress are not the only ones to have made the observation that the EPA is quick to slap fines and potentially sentences on businesses and individuals guilty of polluting. In the case of the Animas River, however, it seems far less willing to pay to clean up its own mess.