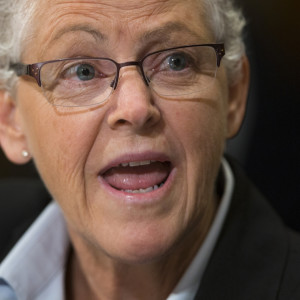 “We’re certainly going to respect the decisions of the court,” the administration’s point person on environmental issues told Chairman K. Michael Conaway, Texas-R., “But as I think we have heard, there is a lot of confusion.”

The Supreme Court on Tuesday delivered a stunning blow to the climate change agenda that McCarthy has spearheaded for the administration, issuing a 5-4 ruling temporarily blocking new lower emission standards for coal plants announced eight months ago. The administration’s crackdown on coal was touted by Obama at December’s international climate change gathering in Paris.

The Supreme Court action comes four months after the 6th Circuit Court of Appeals ordered a stay on the EPA’s “Waters of the United States” rule, a move to extend federal regulatory oversight of rivers, creeks and other waterways that has been pilloried by Western ranchers and landowners.

“It is a pause in the terms of the implementation and enforcement of the Clean Power Plan. But the rule is still in effect and it will add some time to resolve those issues through the courts,” she said. “But we feel very confident that it is going to be borne out to be a legal, lawful and necessary law.”

Conaway seemed skeptical. “Do we need to restrict your funding in the appropriations bill to say ‘no more monies will be spent on back-door implementation of either the Clean Water Plan or the Clean Power Plan?’ Will you commit to not trying to go around the courts?”

McCarthy said the agency will use continue to use the “authorities we have,” and predicted the administration’s air and water regulations would eventually “be seen as an appropriate and proper and necessary application of the law.”

On the Clean Water Plan, she said the EPA is “working with the Army Corps of Engineers to make sure we are implementing what’s currently in place as best we can, try and avoid some of those confusions while we hope to bring some additional clarity when the Clean Water rule makes its way through the courts.”

More than 30 states have filed lawsuits against the water plan.

The administration’s stricter coal plant rules, which call for a phased-in 30-percent reduction in emissions by 2030, will be pursued on a state-by-state voluntary basis, McCarthy said.

“We will continue to provide tools and outreach. But we clearly understand that the courts will be winding through the process of looking at that rule. The [Supreme Court’s ruling] means that it’s going to take a little longer for that to happen. We will respect that, but in the meantime we’re going to continue to address greenhouse gases with the authorities under the Clean Air Act that are available to us today.”

McCarthy also faced criticism from Republican Bob Gibbs, an Ohio hog farmer, over the finding in December by the Government Accountability Office that McCarthy’s agency’s broke the law by using social media to generate public support for the controversial “Waters of the United States” rule.

The GAO, in a 26-page report, ruled the campaign violated restrictions against lobbying and propaganda by federal agencies. According to the report, the agency went beyond its legal authority by linking online to environmental groups’ websites that asked readers to contact lawmakers on the topic.

“I think this is a big deal because it goes to the integrity of the whole commentary process,” Gibbs said, asking if McCarthy had taken any corrective action.

McCarthy pushed back on the conclusions of the GAO report.

“I don’t think that folks in the agency broke the law, but … I don’t want to minimize it,” she said. “We will pay attention to what the GAO said.”