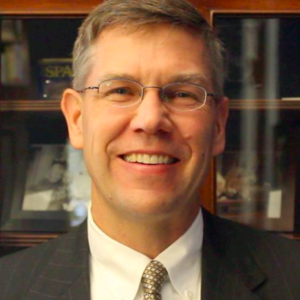 President Donald Trump isn’t on the ballot in 2018, but for Minnesota Republican Eric Paulsen, it sure feels like he’s there.

Rep. Paulsen represents the western suburbs of Minneapolis, a liberal city in a blue state. Though an incumbent, he’s trailing his Democratic opponent, businessman Dean Phillip, in part due to his inability to shake his connections to the unpopular president.

Early in the campaign, Paulsen sought to distance himself from President Trump and his fellow Republicans in this Democrat-trending district that both Hillary Clinton and Barack Obama carried.  Unlike other members of the Minnesota GOP, for example, he spoke out against a proposal to reopen mining in northern Minnesota. His first campaign ad talked about his enjoyment of the Boundary Waters National Canoe Area, depicting him canoeing with his family, and boasted that he would stand up to the Republican party and Trump “to protect Minnesota.”

The ad turned out to be less than effective, however, when the League of Conservation Voters released an ad of their own showing Paulsen riding in the front of an animated canoe steered by President Trump.

“In the Third District, Eric Paulsen separated himself from pro-mining Republicans and looks like he has done himself in,” says Kent Kaiser, a political communications professor in Minneapolis. “I don’t know what base he was trying to appeal to, but it opened him up to attacks [like the ad] from the left.”

For Democrats, flipping MN-03 is key to taking control of the House of Representatives. Despite a trend of supporting Democrats at the national level (the last Republican POTUS candidate to carry the Gopher State was Richard Nixon in 1972), Paulsen’s district has been held by a Republican since the early 1960s.  At the start of the year, pollster Scott Rasmussen labeled MN-03 as one of 19 Republican districts that “could be at risk in a wave election.” The Cook Political Report lists it as “leans Democrat,” a good chance for a Democratic pick-up in November.

“If the Democrats do well in these campaigns, they will have a very good chance of winning a Congressional majority. On the other hand, if the GOP can solidify its position in these races, there will be no wave and the Republicans will preserve a narrow majority,” Rasmussen wrote.

Both parties have thrown millions of dollars at the campaign. By the end of September, election filings reported that the two candidates had together received more than $9 million in donations, with Paulsen’s numbers slightly higher. Green groups, including the League of Conservation Voters are focusing on Paulsen’s environmental record.

Four house races are considered competitive in Minnesota this year. Of the Republicans running, Paulsen was the only one who chose not to embrace Trump. Paulsen skipped the two campaign visits that Trump made to the state and his name was not mentioned from the stage. He is gambling that the loss of publicity is worth disassociated himself with the president who lost his district by 10 points.

That has been difficult as his opponent continues to hammer him about support for the GOP healthcare plan and other issues. To make the matter even more complicated, Trump tweeted out an endorsement of Paulsen on last week, saying that he had done “a fantastic job in cutting Taxes and Job Killing Regulations” and asking voters to “keep Paulsen in Congress.”

Paulsen tried to distance himself from the endorsement, telling an MPR reporter that, “Trump is Trump. He’s going to do what he’s going to do” and releasing a statement that he wished the president would endorse protecting the Boundary Waters instead. (Ironically, given the focus they have received in the race, the Boundary Waters are hundreds of miles north of the third district.)

Trump didn’t help when  then followed up with another tweet on Monday night, October 29th– but with the wrong twitter handle for Rep. Paulsen.

Paulsen’s opponent wasted no time turning the endorsement into a new line of attack.