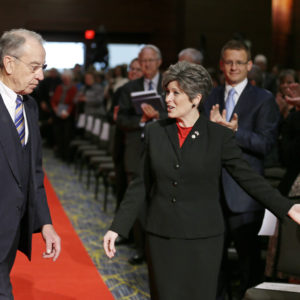 Grassley and Ernst announced in a press conference following the meeting that the two did not anticipate a deal being completed by the end of the meeting, and stated there have been no claims or assurances of any kind made by any party to either remain or refine the RFS.

“We reminded President Trump of his commitment to maintaining 15 billion gallons a year of ethanol under the RFS and his commitment to biofuels, agriculture, and rural America,” Grassley said. “No deal on RFS reform was reached at the White House meeting today. I think that is pretty significant. I didn’t get down there with the idea that we’d reach a deal, and we didn’t, but we went down there to have some good discussion.”

The White House meeting comes on the heels of two significant events in the refinery sector of the economy. The EPA last year released its RFS standards for 2018, shocking many in the renewable fuel industry with a flat rate of increase, as well as failing to increase the amount of soy bean oil that can be added to oil. In addition, Philadelphia Energy Solutions, an oil refinery in Pennsylvania, recently filed Chapter 11 bankruptcy in January, citing rising costs at the hands of the RFS mandate as the reason for the company’s misfortune. Cruz, a proponent of relaxing the renewable fuel standard and allowing the country’s oil exports to count towards the RFS, visited the location last month, and called for change that would fight “big corn” and its influence on RFS.

Ernst said that this upcoming Thursday, Trump would be holding a stakeholder meeting with members of the renewable fuels community and industry to examine the impacts that the RFS has on rural economies and the oil industry, but both she and Grassley were adamant that they were only interested in “win-win” scenarios for the RFS, and that the economic shortcomings with the Pennsylvania refineries are an isolated incident.

“I want to say this, we have the opportunity to make clear that this refinery is very badly managed,” Grassley said. “Carlyle invested [$175 million] five years ago [in it] and has taken out [$550 million in loans and payouts]. Sunoco was delivering oil from North Dakota to this refinery which was evidently very cost effective oil. They were delivering it by train but then Bakken oil is going in the pipelines now so they’re deprived of that, and maybe a lot of other examples of mismanagement. The State of Pennsylvania bailed out the refinery a few years ago as well and so keep that in mind too, that’s the other side of the coin. We’ve got one refinery that’s in trouble and driving the whole thing to ruin the Ethanol industry is the way I see it.”

Cruz has also been blocking the appointment of Iowa’s Secretary of Agriculture Bill Northey to a key position in the USDA since fall of 2017. Hours before the Tuesday meeting, Cruz agreed to the appointment of Northey, an action that Ernst said was not a bargaining chip as the group moves forward with negotiations.

“The way we had been viewing this is that Northey’s confirmation was separate from the RFS issue,” Ernst said. “So Cruz, of his own accord, went ahead and allowed that unanimous consent to go through today. What he’s getting out of it, I don’t know. We’re happy to have [Northey] confirmed, but we see it as a separate issue.”

As to whether or not the meeting was what Cruz had been searching for since last fall, Ernst said that the meeting on Tuesday was similar to the one she had hosted with him at her office in December 2017, but that he kept “pushing the bar” until the group’s meeting today. Trump had arranged Tuesday’s meeting, according to the Senators.