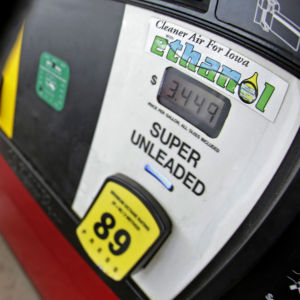 A comprise of capping RINs in exchange for an E15 expansion wouldn't work for the industry, experts say. (AP Photo/Charlie Riedel, File)
News

Editor’s Note: InsideSources worked to do additional reporting on the EPA’s decision by attending an event in Iowa with EPA Administrator Scott Pruitt. The EPA directed law enforcement to remove our reporter before the event began. EPA spokesman Jahan Wilcox has declined to respond to repeated requests from InsideSources to learn why the EPA deemed our reporter such a threat as to have him removed by law enforcement.

The Environmental Protection Agency (EPA) released a final ruling on its Renewable Fuel Standards (RFS) on deadline Thursday. As anticipated from this past July’s proposal, the EPA will maintain its statutory maximum of 15 billion gallons of conventional ethanol. However, with the final ruling, the advanced biodiesel (made from soybeans, used vegetable oil and animal fats) in 2018 and 2019 will be on par with 2017’s production levels (4.28 billion gallons), at 4.29 billion gallons.

In a prepared statement, Iowa Governor Kim Reynolds, whose state is the largest producer of ethanol, expressed gratitude in the EPA’s commitment to the ethanol standards, but expressed disappointment in the low advanced biodiesel standard.

“I’m disappointed that the EPA has chosen not to raise the biodiesel volume,” said Reynolds. “By not raising the RFS levels, the EPA is discouraging investment and discouraging growth. That’s the opposite of what the Renewable Fuel Standard is designed to achieve.”

Back in July, when the Trump administration first released its RFS proposal with the decrease in advanced biodiesel targets down to 4.24 billion gallons, many in the renewable/biofuel industry publicly expressed that the lowering of advanced biodiesel standards would harm the growth made in the industry. According to a letter to the Trump administration from the Directors of the National Biodiesel Board (NBB) back on November 16, “4.24 billion gallons for advanced biofuels and 2.1 billion gallons for biomass-based diesel—are themselves so low that, if finalized, they will halt the growth of the biomass-based diesel industry.

“The 4.24-billion-gallon number is a reduction from the previous year’s 4.28 billion gallons, which sends a starkly negative signal to the industry as a whole.”

“EPA Administrator Pruitt has disappointed the biodiesel industry for failing to respond to our repeated calls for growth,” Whitehead said in a prepared statement. “These flat volumes will harm Americans across several job-creating sectors—be they farmers, grease collectors, crushers, biodiesel producers or truckers—as well as consumers.”

Though the commitment to 15 billion gallons of ethanol blending has farmers happy, the oil industry has made comments that it will not only increase the costs of oil production, but it will also be harmful to vehicle owners as well.

According to the American Petroleum Institute (API), most gasoline contains 10 percent ethanol, “which all automobile engines are built to accommodate.” But if the RFS standards continue, API claims that it could force more E15 (15 percent Ethanol) onto the market. The API states that three out of four vehicles in the U.S. were not built to run on E15, especially motorcycles, boats, lawn equipment, and ATVs. API reports that many automakers say that using E15 could potentially void new car warranties. Already, several auto companies whose Model Year 2018 cars and trucks are not compatible with E15 including: BMW, Mazda, Mercedes, Mitsubishi, Subaru and Volvo.

“The Renewable Fuel Standard is broken and needs comprehensive reform,” said API Downstream Group Director Frank Macchiarola in a response to the RFS release. “Since the RFS was instituted more than a decade ago the U.S. has greatly reduced its dependence on crude oil imports. So this program is trying to solve a problem that no longer exists while creating real problems for consumers.”

Oil industry leaders have petitioned the EPA to decrease the ethanol mandate to avoid exceeding whats called the 10 percent “blend wall,” meaning the amount of cars on the road that can run on anything lower than 10 percent ethanol. According to the Institute for Energy Research (IER), 2017’s standards were at 10.44 percent, while 2016’s standards were at 10.1 percent. The percentage over for 2018 and 2019 are not calculated as of now.

However, with current oil prices being traded at lower costs than anticipated and ethanol being traded at higher costs than anticipated, oil refiners are having to pay high costs to blend ethanol. According to the IER, Renewable Identification Number credits (what refineries must purchase when they cannot purchase enough ethanol to blend) jumped from 54.5 cents per gallon to 80 cents per gallon from 2015-2016.