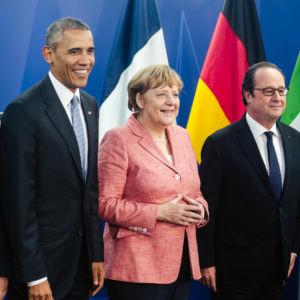 As we enter the new year, Europe’s economic and political crisis appears to be entering a new and more dangerous phase that could have serious implications for the euro’s longer-run survival. This is not simply because Europe is scheduled to have hotly disputed elections in 2017 in four of its major economies and because the United Kingdom is heading for a hard Brexit. Rather, it is because the European sovereign debt crisis is now lapping at the Italian shore at the very time that German Chancellor Angela Merkel’s political star is waning.

Until now, the European sovereign debt crisis, which began at the start of 2010, has largely been confined to Europe’s smaller peripheral economies. The crisis that started in Greece soon spread to Portugal, then to Ireland and then to Cyprus. Common to all of these countries was the fact that they had relatively small economies, which were susceptible to being bailed out at an affordable price to their Eurozone partners.

To be sure, there has been a rising political backlash in the northern European countries to the very notion of bailing out what a large part of its electorate perceives to be the profligate and irresponsible countries of the south. However, thanks in large measure to Merkel’s bold leadership, the political will was somehow found to allow the European Stability Mechanism and the European Central Bank to keep all of those southern European economies from crashing out of the euro.

Judging by the political fallout from the Italian government’s stinging defeat in the constitutional reform referendum in early December 2016, there is every prospect that Italy will be the next country to succumb to the European sovereign debt crisis. This could be highly problematical for Europe.

As Europe’s third-largest economy and as a founding member of the euro, Italy is simply too big to fail if the euro is to survive. Yet Italy would also seem to be too large an economy for Europe to save should it indeed succumb to a severe economic and financial crisis. This is particularly the case considering that, at more than $2.5 trillion, Italy has the world’s third-largest sovereign bond market and it has a banking system with in excess of $4 trillion in assets.

Sadly, there are all too many reasons for fearing that Italy could succumb to a serious economic crisis before 2017 is out. In the wake of the referendum defeat, Italy now seems to be headed for early elections, most likely in the fall. Those elections could see further gains for the populist and anti-euro Five-Star Party, which is already level in the polls with the ruling Democratic Party and which could benefit politically from the unpopular banking sector bailout that the government is now forced to undertake.

One would think that heightened political uncertainty in the run-up to early elections could fuel capital flight out of Italy that is already well underway and could also make it difficult for Italy to jump start its moribund economy through a program of ambitious economic reforms. Without economic growth, there is little prospect that Italy can realistically reduce its excessive public-sector debt burden as reflected in a debt-to-GDP ratio of around 132 percent.

For Europe, there would never be a good time to have to deal with an Italian economic crisis. However, 2017 would seem to be a particularly inauspicious year for such an event. The economic crises in both Greece and Portugal far from fully being resolved; rather, the European political environment is likely to become agitated by forthcoming elections in France, the Netherlands and Germany, where anti-European forces are gaining traction.

Particularly concerning for the maintenance of European cohesion has to be Germany’s parliamentary elections, which are most likely to take place in September. Current polls indicate that it is far from clear that Merkel’s ruling coalition will win those elections. They also indicate that the far-right and anti-euro Alternative for Germany party will now win as much as 15 percent of the vote. In these circumstances, one would think that in the run-up to those elections, it will be very difficult for Merkel to rally financial support for yet another troubled European country as she managed so successfully to do in the past.

It is hoped the coming Trump administration will not dismiss Europe’s all-too-likely economic and political troubles in 2017 as events occurring on distant shores with little bearing on the U.S. economic outlook. Given its still very considerable weight in the global economic and financial system, a serious setback in the European economy in 2017 would have major reverberations throughout the global economy.