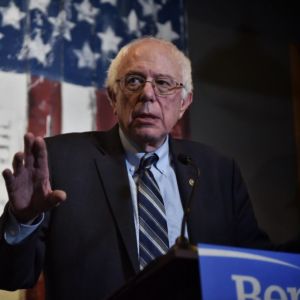 All the touting of recent primary wins, the plan to press on despite daunting delegate math, the argument that Hillary Clinton superdelegates should switch sides and upend the race at the last minute — it’s exactly the same strategy Elleithee pursued as the traveling press secretary for a presidential candidate in 2008. He was working for Hillary Clinton.

“I was the guy on the back of the plane with Hillary trying to argue, ‘Look, we’re winning all these states at the end, and these superdelegates should come our way,'” Elleithee told InsideSources on Wednesday. In the end, “We just got beat,” he said. “The Obama campaign played the game better than we did.”

That’s a reality coloring the communicator’s perception of this election, which he’s watching on the sidelines, from his perch at the Georgetown Institute of Politics and Public Service. Chaos at last weekend’s Nevada Democratic convention renewed accusations that Democratic officials have treated Sanders and his supporters unfairly, but Elleithee said “it’s pretty clear they were treated more than fairly.”

“I’ve never seen a campaign that didn’t feel it was being treated unfairly,” he said.

What happened in Nevada was complicated, but New York Magazine summarized it thus: “56 pro-Sanders delegates were disqualified for failing to register with the state party by May 1 (eight Clinton delegates suffered a similar fate). Hillary Clinton then won the convention by a 33-vote margin. … Bernie-backers proceeded to storm the stage, throw chairs, and say swear words until security kicked them out. Later, someone published Nevada Democratic Party chairwoman Roberta Lange’s personal contact information, and America’s worst social democrats harassed her with obscene messages and death threats.”

Sanders’ response to this generated more controversy. He condemned the violence in a statement but also said the Democratic Party has a choice: “It can open its doors and welcome into the party people who are prepared to fight for real economic and social change – people who are willing to take on Wall Street, corporate greed and a fossil fuel industry which is destroying this planet. Or the party can choose to maintain its status quo structure, remain dependent on big-money campaign contributions and be a party with limited participation and limited energy.”

Elleithee pointed out that Clinton won the Nevada Democratic Caucus in February. At the convention, Sanders supporters “tried to game the system — totally legitimately — to overturn the will of the people in Nevada,” he said. “They failed. Sometimes losing is just losing. Losing doesn’t mean there was a conspiracy.”