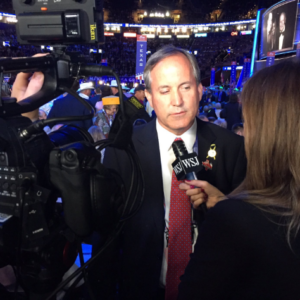 Texas AG Details His Multistate Fight Against the EPA

The Clean Power Plan seeks to reduce carbon emissions by setting goals for individual states to reach. Texas and West Virginia are leading roughly two dozen other state attorney generals in a lawsuit against the rule. Lawyers for both sides argued their position Tuesday before the District of Columbia Court of Appeals.

The Environmental Protection Agency drafted the new rule to reduce carbon emissions from power plants. The lawsuit argues the agency is overstepping its authority and that the new rule discriminates against existing power plants. It implements strict standards that newer power plants have the technology to more easily overcome.

Nevertheless, the EPA asserts the new rule will be beneficial. It argues that reducing carbon emissions will help counter climate change. The EPA and environmental activists have adamantly claimed, with some scientific support, that human produced carbon emissions have a very negative impact on the environment.

“A historic and important step in reducing carbon pollution from power plants that takes real action on climate change,” the EPA detailed. “[It’s] shaped by years of unprecedented outreach and public engagement, the final Clean Power Plan is fair, flexible.”

The lawsuit also alleges the new rule will hurt the economy by increasing prices while sacrificing reliability. Paxton notes some existing power plants will likely be forced to close leading to national brown outs and rolling black outs. Paxton estimates the new rule could cost the economy anywhere between $29 billion and $39 billion annually.

“These new regulations will dramatically, negatively impact the reliability of electricity in this country,” Paxton stated. “Largely the costs and reliability are going to be impacted for very little, if any, marginal benefit.”

The EPA has already faced a major setback that has kept it from implementing the rule. The U.S. Supreme Court ordered the agency Feb. 9 to not implement the rule pending judicial review. The agency has argued the decision does not reflect the facts.

“EPA firmly believes the Clean Power Plan will be upheld when the merits are considered because the rule rests on strong scientific and legal foundations,” the EPA stated at the time. “For the states that choose to continue to work to cut carbon pollution from power plants and seek the agency’s guidance and assistance, EPA will continue to provide tools and support.”

Paxton sees the court order as critically important. The EPA could have continued to implement the rule even as the lawsuit was pending. Even if the attorneys general won the case the rule would already be implemented in many regions.

“The stay is significant in that if we had not gotten it the EPA could have forced states to pursue a state implementation plan which would have ultimately forced them to move forward before we knew whether this law was something that is valid,” Paxton argued. “The EPA has done this in the past.”

Paxton believes that decision will ultimately come down to the current presidential election. Whoever loses the case is likely to appeal it to the U.S. Supreme Court. The court is split 4-4 at the moment as Congress has not approved President Obama’s nominee.

“We have an election coming on in November. We’re missing a Supreme Court Justice,” Paxton explained. “The determination of this ultimately I think is going to come down to who wins the presidency.”