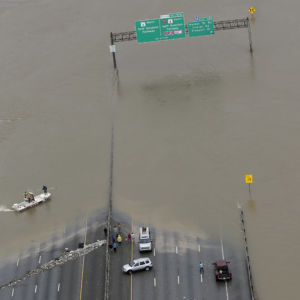 The flooding and near destruction of Houston and the Gulf Coast is such an event. It will influence public policy for decades to come.

First, there is going to be the gigantic national job of rebuilding the nation’s fourth-largest city — and quite possibly abandoning large parts of it. It will affect property values in flood-prone cities, like Miami, New Orleans, New York and Tampa, Fla. It will result in urgent calls for the construction of new flood barriers, or the beefing up of those that already exist in cities like Providence, R.I., and New Bedford, Mass.

Going forward, there will be a new existential threat felt in the United States: climate uncertainty. It will not matter whether the Houston disaster is linked to the burning of fossil fuels. What will matter is that the warnings of dramatic changes in climate will have an influence they have not hitherto had.

The sky has fallen.

The aberrant weather — which has not only wrecked Houston and Beaumont, Texas, with flooding but also agriculture in much of Sub-Saharan Africa with severe drought — now will be a real concern to Americans. We will start to take notice of floods in faraway places.

Leaving aside whether human activity is contributing, climate uncertainty will move to the very front of the national agenda, and it will influence our politics and sensitize us to the warnings of scientists. Those who have thought climate change to be some kind of liberal scheme to punish big coal, big gas and big oil will get short shrift in the court of public opinion.

President Trump went out on a limb, urging more coal production, trashing the Paris climate accord, disbanding the federal advisory panel for the National Climate Assessment, shrinking the Environmental Protection Agency and undoing its rules, including the Obama-era Clean Power Plan. But the Houston disaster may have him climbing back.

There will be other changes affecting public policy as the nation moves forward. A debt ceiling increase without a shutdown is now assured: No one in Congress or the White House will want stories of Federal Emergency Management Agency employees being furloughed while people are still in shelters in and around Houston — and where they might be for a very long time.

There might be a change ahead for Trump’s plan, still vague, for a tax overhaul. Large tax cuts may not be appealing to Congress as it contemplates the enormous new costs for cleanup, demolition and construction along the Gulf Coast, and for fortifying coastal cities.

Texas will be seeking and getting masses of federal aid. With its powerful congressional delegation and political friends at all levels in the Republican Party, Texas will be hard to deny. It is going to be all Texas, all the time on the news and on Capitol Hill for weeks and months, even years.

Meanwhile huge flooding in Bangladesh, India and Nepal will help to buttress climate fear. According to the United Nations, The New York Times reports, at least 41 million people in those three countries have been directly affected by flooding and landslides resulting from severe monsoon rains this summer; and more than 1,000 have died in floods across South Asia.

This will increase the pressure on the Trump administration to make climate a policy priority. If the president won’t, Congress will; and it will be because of Houston. New electric generation — wind, solar and possibly nuclear — and electrified cars and trucks will be the winners.

It’s no longer the economy, stupid. Now it’s the climate, stupid — and it will be for decades. Something truly seminal has happened.