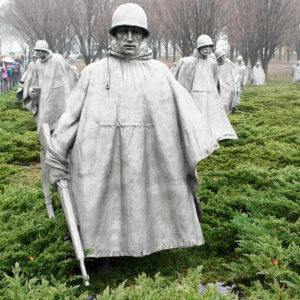 Expect N. Korea to Try to Cash In on Remains of Americans

The North Koreans are reluctant to talk about “denuclearization” but are winning easy points exploiting the bones of about 5,300 Americans still missing from the Korean War.

At every stage of discussion on repatriating GI remains, the North is able to promote a peace declaration that’s also endorsed by South Korean President Moon Jae-in. What could be a better time to get across the message than the 65th anniversary this Friday of the signing of the armistice that ended the Korean War? Wouldn’t that be the moment, North Korean strategists are saying, to transfer the first batch of the 200 sets of remains, the same ones President Trump mistakenly announced several weeks ago had already been returned?

The North Koreans would love all sides declaring “peace” as a prelude to replacing the armistice with a full-fledged peace treaty. That’s crucial to calling for withdrawal of the 28,500 U.S. troops now in South Korea. Moon has said he’s not in favor of U.S. troops going home — a move that would definitely jeopardize the longstanding South Korea-U.S. alliance — but the North Koreans and their Seoul mates are sure to be asking, if we’re “at peace,” why should the Americans still be here and why maintain the alliance?

The North Koreans will be promoting that argument in hopes of getting Trump to agree on the peace declaration, and they’re banking on his enthusiasm for searching for GI remains as a means to that end. Considering that Trump went along with Kim Jong-un’s request at their summit in Singapore for stopping joint U.S.-South Korean military exercises, pro-North strategists think there’s a chance he’ll assent to a statement on peace when the North begins transferring those 200 remains at Panmunjom where the truce was signed on July 27, 1953.

For North Korea, the return of the remains promises to be a gift that keeps on giving, a never-ending game with a special bonus. The United States holds that each set of remains is priceless, not a product with a price tag, but the North stands to reap millions of dollars in “expenses.”

Stories of North Koreans gouging Americans for money were commonplace in the 11-year period when the United States and North Korea conducted “joint recovery operations” until 2005 when George W. Bush, then U.S. president, decided enough was enough.

Bruce Bechtol, a former Defense Intelligence Agency analyst and author of numerous books and studies on North Korean military issues, recalls the leader of one of the U.S. search teams complaining “the North Koreans want money for everything.” There were even reports of North Koreans hoarding what purported to be remains in hopes of profiting from their “discovery” by Americans with whom they were combing the terrain.

The fear at the time was the North Koreans would hold Americans hostage as U.S.-North Korean relations deteriorated after the breakdown in 2002 of the 1994 Geneva agreement, under which the North had locked up its nuclear reactor at the Yongbyon complex north of Pyongyang and stopped fabricating nuclear warheads with plutonium at their core.

Exposed as having ordered a separate secret program for making warheads with highly enriched uranium, Kim’s father, Kim Jong-il, expelled inspectors from the International Atomic Energy Agency at the end of 2002. Then, in early 2003, he withdrew from the Nuclear Non-Proliferation Treaty in the run-up to the North’s first nuclear test in October 2006.

As the United States and the North resume joint recovery efforts, we may be sure the North Koreans will be asking for tons of money without doing a thing about denuclearization.

However, the North’s long-running campaign for a peace treaty takes higher priority than money, in the view of Mark Fitzpatrick, a former U.S. diplomat, now with the International Institute for Strategic Studies. Sure, joint recovery operations will provide a steady revenue stream, but he believes more importantly they see engagement with the United States as leading to talks on a peace treaty.

Kim Tae-woo, former director of the Korea Institute for Defense Analyses, notes the North Koreans, focusing on remains, have gotten the Americans to overlook the whole issue of human rights. “They see everything from the viewpoint of leverage,” he reminds me. While pushing for a “Declaration of the End of the Korean War,” they’re of course saying “nothing about a timetable” for denuclearization.

Many years after they died in long-forgotten battles, the legacy of those soldiers, airmen and Marines “missing in action” endures in a renewed struggle for control of the Korean Peninsula.