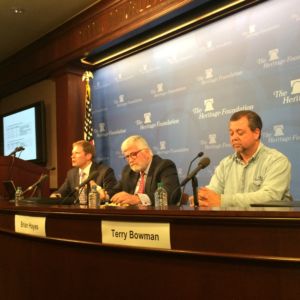 6 Percent of Unionized Workers Voted in Their Union, Research Finds

A mere six percent of unionized workers across the country voted on the union that now represents them, according to a panel discussion Thursday.

Labor unions are often praised as a democratic structure that provides workers a choice. In reality most unionized workers never had a choice to begin with. Unions that win the right to represent a workplace never have to face reelection unless workers explicitly file for a decertification vote.

“Unions have an incredible amount of control,” Heritage Foundation Research Fellow James Sherk said during the panel. “I thought it would be an interesting question to ask, what fraction of unionized workers actually voted for the union that represents them.”

Roughly eight million workers throughout the country are represented by a union. The analysis finds that only about 478,189 of those workers actually voted in their union. Its not uncommon for a union to represent a business for several generations. They sometimes outlive the very workers that voted them in.

The panel included a unionized automobile worker along with a former member of the National Labor Relations Board (NLRB). Heritage hosted the panel discussion to correspond with new research which demonstrates the small percentage of workers that had a chance to vote.

“There is no requirement, as James pointed out, that a representative union stand for reelection ever,” former NLRB Member Brian Hayes stated. “They can exist in perpetuity and there is no external force which says, okay, we have to recheck the representative status of this union. That just doesn’t happen, it doesn’t exist under the rubric of the National Labor Relations Act.”

The panelists warn that the current structure is prone for abuse. They argue that unions are not incentivized to provide a good service to their members because they don’t have to fear being voted out every few years during an election.

Sherk recommends that union election function more like a political election. Unions would essentially have to be reelected every few years or so. Wisconsin Gov. Scott Walker included a union reelection provision in his highly controversial Act 10 law. Critics argue the idea is merely a union-busting scheme.

“Act 10 requires that the union win 51 percent of all those eligible to vote in a bargaining unit, and the final tally of 49.5 percent fell short,” former Wisconsin State AFL-CIO Research Director Joanne Ricca said in 2013. “Any employee who does not vote is essentially counted as a ‘no’ vote.”

Hayes also notes that its much more difficult to get rid of unions. Decertification votes come with many conditions imposed by both the government and the union representative. The process tends to take longer and unions can disrupt it through a variety of avenues like filing an unfair labor practice complaint.