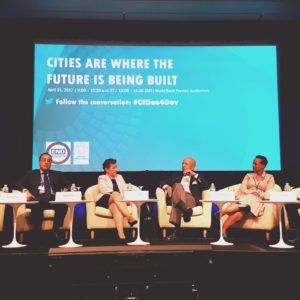 Experts Discuss How City Design Should Balance Flexibility and Growth

Residents of Washington D.C. have mixed feelings about Pierre Charles L’Enfant, who laid out the gridwork of the city’s streets. His plan gives the city a sense of order that most old world capitals lack, even as the numerous traffic circles snarl in rush hour traffic. Residents of New York City are less likely to know the name of John Randel Jr., the young surveyor who plotted out the gridwork for the city’s streets, nor are citizens of Minneapolis likely to know H.W.S Cleveland, who plotted the parkways that today are major thoroughfares in the city. Today each of these cities benefits from these city planners who laid the foundations for their subsequent rapid growth.  What lessons can governments today take from past city design, and how should we be looking forward now? This was the topic of discussion at the World Bank Headquarters in Washington, D.C. on Friday.

A panel of academics, government ministers, and leaders of multinational organizations spoke about the challenges of designing “cities where the future is built.” Their discussion revealed that while the group agreed on the importance of urban development, they had different ideas about the degree to which city planners could prevent future quality of life problems.

Paul Romer, chief economist at the World Bank, warned that focusing city design too much on environmental concerns could negatively influence city design by minimizing open areas and green space.

“The risk is that if we try to overplan for a particular goal, for example reducing carbon, we won’t take those steps towards protecting public space,” said Romer, “and then we will get completely unplanned development that doesn’t even have public space.”

According to World Bank statistics, over half of the world’s population already lives in cities. This percentage is predicted to grow over the coming decades, making future planning an important priority for cities. Romer argued that a development plan that laid out the framework of roads and greenspaces, but allowed future construction to proceed organically, was the best hope of meeting future needs.

“If we don’t draw enough lines to allow for future development then people are going to settle in informal settlements and that’s what leaves them in a disadvantaged position,” he said.

Other panel members argued that such structure only helped certain parts of society, leaving others marginalized and living in shantytowns or slums.

“We have to think about how we can move in the urban poor so that they can be located in the parts of the city where they need to be located in so that they can live in environmentally-sensitive areas,” said Yondela Silimela, the executive director of development planning in Johannesburg, South Africa. Silimela went on to list a variety of policy tools that the city could use to direct development and prevent inequality from developing.

This combination of city design and the creation of a better society was echoed by Christiana Figueres, vice-chair of the Global Covenant of Mayors for Climate and Energy, which is working to ensure implementation of the Paris Climate Accords.

“Cities are hugely important both because they emit the greenhouse gases, but also because there is such a huge possibility for cities to be smarter, to be much more efficient, to be more human-centered, and to be part of the response [to climate change,]” said Figueres. She argued that cities could not be designed in ways that failed to account for the reality of climate change, though she admitted that the perfect green city had not yet been constructed.

For all the talk of the need to protect the poor from the powerful, the World Bank panelists primarily focused on how those in power could better design, build, and manage cities, instead of asking what city residents wanted or needed.

In the end, it took a former mayor to draw the discussion back from high level city design to practical realities.

“I had a city that was completely broke,” said Anthony Williams, former mayor of Washington, D.C., “absolutely nothing worked.”

“We promised everything to everyone and we couldn’t deliver anything to anyone. We were overpromising and underdelivering,” he said. William provided a note of caution to the enthusiastic urban planners, warning that the realities of governing often got in the way of lofty development plans.

His warning was apt. The panel’s organizers stressed the role that cities will play in the world economy in the coming decades, with statistics showing that “more than 80% of global GDP [is] generated in cities” and that more than half of the world’s population already lives in urban areas.

To some extent these numbers are deceiving. Certainly cities are powerful economic forces, but not all cities command equal weight. After all, according to a Brookings Foundation report from 2015, the New York City metro area has an estimated GDP of more than $1.5 trillion, Los Angeles a GDP of $930 million, and Tokyo a GDP of over $1.6 trillion. For perspective, this means that New York and Tokyo have GDPs larger than many countries. New York and Tokyo each accounted for about 1 percent of the gross world product that year.

At the other end of the spectrum are cities in the third world, whose populations are expanding rapidly even though the cities themselves have relatively small economies.

What draws residents to cities like London, New York, and Tokyo is often better job prospects. Ironically, this was the case for several of the panel members. Figueres admitted that she had not lived in a city before moving to London for work. Meanwhile, third world cities have grown by attracting residents from rural areas, but have not yet seen the same sort of economic clout.

As cities continue to expand, will they be more like Tokyo or Cairo? And are city designers able to help or hinder this process?