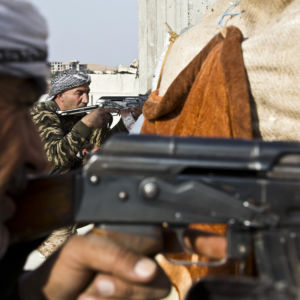 Fighters from the Free Syrian Army, left, and the Kurdish People's Protection Units (YPG), center, join forces to fight Islamic State group militants in Kobani, Syria. Here, Kurdish fighters backed by small numbers of Iraqi peshmerga forces and Syrian rebels, are battling what they see as an existential battle against the militants who swept into their town in mid-September as part of a summer blitz that saw the group seize large chunks of territory in Syria and neighboring Iraq. (AP Photo/Jake Simkin)
News

There was certainly more than one headline-grabbing moment in Tuesday’s Senate hearing on the ideology of ISIS.

A young Yazidi woman recounted her harrowing experience of enslavement and gang rape by the Islamic terror group, holding the Homeland Security Committee in rapt attention.

Then a well-regarded Muslim scholar said he had “no problem” with the term “radical Islam,” in contrast to the Obama administration.

But the biggest takeaway Tuesday wasn’t gripping personal narrative or a politically charged soundbite. It was the idea that, notwithstanding their recent military victories, the United States and its allies need a better public relations strategy against ISIS — especially in communicating with Muslims and young people at risk for radicalization.

As a Muslim himself, Elgawhary argued it’s incumbent upon Islamic faith leaders to ensure that their particular counter-narrative is “unequivocal,” not “wishy-washy.” He even road-tested some decidedly un-wishy-washy rhetoric of his own, calling terrorists “unlettered warmongers” posing an “existential threat to our religion.”

“They are unlettered warmongers who have, in essence, created a parallel religion and called it Islam,” Elgawhary said. “Yet, this parallel religion that they call to is no more Islamic than a pool with one lemon squeezed in it is lemonade.”

To get more Middle Eastern Muslims talking like this, Elgawhary made an explicit call for increased investment in media training. “There’s a lot of good leaders making the right arguments, but you can’t write a 40-page legal opinion and expect that to be trending on Twitter,” he said.

At the same time, Elgawhary acknowledged that many Muslims simply need to speak out more strongly against terror. When New Hampshire Sen. Kelly Ayotte, a Republican, asked him about the prominent Al-Azhar Mosque in Cairo, he said its leaders are “not very good in front of the cameras” and thus exemplify the need for better communication.

Democratic lawmakers were also eager to talk messaging and media. New Jersey Sen. Cory Booker and North Dakota Sen. Heidi Heitkamp both asked follow-up questions on the subject, and they heard from Hassan Hassan, the resident fellow at the Tahrir Institute for Middle East Policy who co-authored the bestseller “ISIS: Inside the Army of Terror.” He said ISIS can be undermined if its opponents stress that the group kills Muslims on a daily basis, but “we don’t see that in media.”

Hassan went into even more detail on the stakes of the public relations battle in his prepared testimony. “I argue that we have reached a point where the Islamic State’s international appeal has become untethered from its military performance on the ground,” he said. “The U.S.-led campaign has failed to rally everyone against the Islamic State, including those who proved to be opposed to the group.”

Meanwhile, he said, ISIS is playing the long game — allowing for short-term military losses, recruiting a new generation of fighters and hoping its enemies are worn down by the conflict. “This is a group that knows what it is doing.”