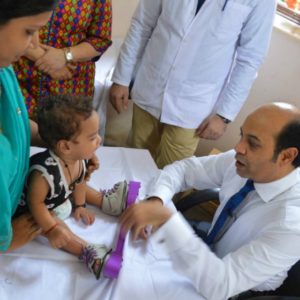 A nice-looking pair of baby shoes connected by a brightly colored boomerang is a harbinger of big trends in 21st-century healthcare.

Each year, 200,000 children worldwide are born with clubfoot, a condition where malformed tendons turn the child’s feet inward. Left untreated, clubfoot renders sufferers unable to walk normally and threatens the ability to earn a living and lead a normal life.

Clubfoot, however, is a highly treatable condition — mostly handled through non-surgical treatment alone. In the 1940s, Ignacio Ponseti, a Spanish-born orthopedist at the University of Iowa, developed the standard treatment — the Ponseti Method. This multi-year procedure begins with manipulation of the feet, followed by a series of plaster casts worn round-the-clock, a brace holding the feet in place at night, and a lengthening of the Achilles tendon.

The Ponseti Method has a high rate of success. But braces are costly ($300 to $1,000 for the brace in the United States). Unfortunately, a large majority of clubfoot cases occur in low-income countries where the cost of braces is a major impediment to families getting proper treatment for their children.

The effort made its way to a design course on “extreme affordability.” The challenge issued by MiracleFeet was to reduce the cost to below $20 while providing a brace as easy to use and functional as the traditional brace. Four students — Jeff Yang, Ian Connolly, Michael Adhoot and Katie Jaxheimer — came up with the award-winning design. To cut costs, they shifted from the standard metallic brace to 3D-printed prototypes and, ultimately, an injection-molded plastic design. The students designed a customized snap that allows easy attachment and detachment of shoes and brace.

Crucially, the shift to plastic meant the braces could be fabricated in bright, appealing colors, rather than the steel models that preceded them. Instead of a cold industrial look that stigmatized wearers (and in some countries, their parents), the MiracleFeet Brace looks more like a toy or game. A common story is of other children wanting to try out the brace because it looks fun.

The attractiveness of the MiracleFeet Brace makes compliance with the regimen of therapy more likely. It almost certainly yields positive psychological effects. The same salutary effects have been noted with respect to the brightly colored 3D-printed prosthetic hands produced by the e-NABLE movement.

The development of this product by a cross-disciplinary group of undergraduate and graduate students represents the democratization of production and innovation. There is also democratization in consumption, as parents with no particular health-care skills can now assume part of the burden formerly occupied by trained professionals. MiracleFeet Brace breaks the notion that technological innovation in healthcare can’t be cost-decreasing.

MiracleFeet is establishing synergies with other technologies: text messages to bolster compliance, multilingual learning modules, sensors on the braces to collect and aggregate data from multiple patients, and links to telemedicine practitioners for easier consults.

MiracleFeet currently distributes the brace in nine countries and will soon launch a randomized control study to compare compliance of the MiracleFeet Brace with that of traditional, locally made braces in India.

Outside the United States, major obstacles to adoption include hesitancy to adopt a new product by orthopedic surgeons until it has been thoroughly tested (even though it meets all the same medical specifications as any other brace), and the complexity of navigating international shipping and customs.

Colloredo-Mansfeld, Miracle Feet co-founder, said the only complaints MiracleFeet has received have come from American parents, frustrated that the brace is not available in the United States. American medical providers and insurers automatically issue the expensive metal braces. And while MiracleFeet is registered with the U.S. Food and Drug Administration, American regulations, product liability laws, and insurer payment rules currently make it infeasible to distribute the MiracleFeet Brace in America.