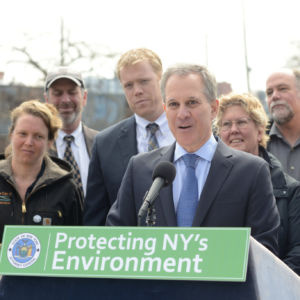 For more than a year, ExxonMobil has been at the center of an investigation by New York Attorney General Eric Schneiderman, initially alleging that the company covered up evidence supporting a connection between fossil fuels and global warming. On Friday, ExxonMobil fought back, releasing a statement of its own that called out Schneiderman for making “inflammatory, reckless and false allegations” about the company.

“From the outset of this investigation, it has been clear that the attorney general is working backwards from an assumption of ExxonMobil’s guilt, searching in vain for some theory to support his prejudgment,” the company said in a brief to the New York Supreme Court.

On June 2, Schneiderman alleged that the company’s carbon pricing practice was a “sham,” claiming that the company used publicly stated figures of the proxy cost of carbon and a “secret internal version” in its analyses. ExxonMobil’s lawyers counter that, despite having access to millions of pages of company documents, Schneiderman has been unable to point to any instances where a cost of carbon was not applied, but should have been.

The two sides are quibbling over accounting rules, specifically whether Generally Accepted Accounting Principles and SEC rules require the company to use a single estimate of carbon pricing when evaluating impairment or estimating reserves.

“ExxonMobil’s use of different metrics, in different circumstances, to accomplish different goals evinces prudent financial stewardship, applying appropriate assumptions in appropriate cases. There is nothing untoward or surprising about any of this,” the brief states.

Supporting the company’s claim, estimates of proven oil reserves frequently fluctuate depending on the current price per barrel. Exploration of different oil fields becomes more or less economically feasible depending on oil prices.

The company is arguing that Schneiderman’s lawsuit is in bad faith. Schneiderman is suing for access to decades-worth of ExxonMobil company documents. Already, attorneys general from 11 other states have filed an amicus brief in support of the company. The brief argues that the case against ExxonMobil is a violation of the company’s First Amendment rights and that Schneiderman’s pursuit of company records was an “unrestrained, pretextual investigative [excursion] to promote one side of an international public policy debate.”

The amicus brief supports arguments made by ExxonMobil’s attorneys in court.

“For a prosecutor proceeding in good faith, the absence of any evidence of wrongdoing is grounds for closing an investigation, not expanding it,” said the ExxonMobil brief.

“Even more frivolous is the attorney general’s claim that it was inappropriate to use the actual cost of carbon … when assessing overall project economics, rather than hypothetical figures. There is no basis in law or logic to find fault for relying on actual costs when available,” it continued.

The case against Exxon has already sparked controversy. Schneiderman began in 2015 by investigating if ExxonMobil had conspired to cover up climate change science. He later changed the investigation into a probe into allegations that the company had downplayed the impact global warming would have on its balance sheet. The case later expanded into alleged discrepancies in how ExxonMobil calculated its estimated oil reserves.

Critics of Schneiderman claim he and his office conspired with environmental activists leading up to the launch of the investigation. Schneiderman’s office has refused to release emails documenting communications with political activists.

ExxonMobil believes that Schneiderman’s current claim, that it was underestimating the impact of climate change on its business in order to defraud investors, directly contradicts his claims in the initial investigation.

“No further evidence is required to establish the political motivation of the attorney general’s fruitless year-and-a-half long investigation pursing his ever-shifting and unravelling investigative theories,” the brief said.