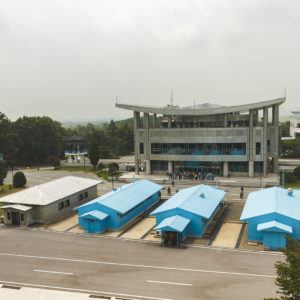 Village of Panmunjom, border between North and South Korea. View from North Korea.
[IS] Opinions

Eyes Are Turning Toward Panmunjom for Kim-Trump Summit

It’s looking increasingly as if we are going to have a historic summit at the truce village of Panmunjom.

President Donald Trump has said Panmunjom would be just the place for “a great celebration,” assuming the negotiations with North Korean leader Kim Jong-un turned out to be “successful.” He also said, however, that he would simply walk out of a summit with Kim if the talks were not going well.

For sure, Trump and Kim are expected to have quite different views on the meaning of “denuclearization.”

The United States thinks “denuclearization” means getting rid of all the nukes that North Korean physicists, engineers and technicians have produced at the Yongbyon nuclear complex, site of the North’s five-megawatt reactor that produces the weapons-grade plutonium for warheads. The Americans also insist the North tear down the reactor and all the other equipment with which the North has made warheads while closing the nuclear test site at Punggye-ri in the far northeastern region of the country.

Kim, however, has said only that he’s suspending all nuclear and missile tests and shutting down the Punggye-ri site but has avoided the whole issue of doing away with his nuclear facilities or destroying the warheads in his inventory.

To the consternation of the Americans, Kim seems to think closing the Punggye-ri site and freezing testing should be enough. He has denied that the site was already destroyed by the North’s sixth and strongest nuclear test last September in which tremors were felt in the surrounding region and tunnels were reported to have collapsed, killing at least 200 people. Two of the site’s tunnels are still usable, he said, promising to invite journalists there to take a look.

Trump talked about his hopes for meeting Kim at Panmunjom after his summit Monday with Nigerian President Muhammadu Buhari at the White House. Although North Korean negotiations had nothing to do with Nigeria, reporters fired questions at him about Korea at a news conference held jointly by the two presidents.

Trump was obviously impressed by the smooth manner in which South Korean President Moon Jae-in’s meeting with Kim last Friday was carefully staged from the moment that Kim crossed the Military Demarcation Line to the southern side of the Joint Security Area inside the DMZ to the farewell dinner featuring cold noodles from Pyongyang. He was so enthusiastic that he let Moon know — and relayed the idea to North Korea.

“I threw it out as an idea,” he said. The advantage of Panmunjom, he explained, is “you’re actually there” and “if things work out, there’s a great celebration to be had on the site, not in a third-party country.”

For Kim, of course, Panmunjom would be good since he would not have to fly to a third country — something he has never done since taking over after his father’s death in December 2011. Also, having seen Moon in Panmunjom already, he would know what to expect when he gets there.

Trump in a tweet seemed totally enthusiastic. “Numerous countries are being considered,” he said, “but would Peace House/Freedom House on the Border of North & South Korea be a more Representative, Important and Lasting site than a third-party country?” “Just asking,” he tweeted, acknowledging that the city state of Singapore was also under consideration.

If the two do decide on Panmunjom, it’s by no means certain that Kim will want to walk with Trump to Peace House, as he did with Moon. Some analysts are speculating that Kim instead may want to see Trump in Panmungak, the building on the North Korean side facing Freedom House on the South Korean side. It’s even possible they will hold two meetings on the same day — one in Peace House, off to one side from Freedom House, and the other in Panmungak.

We won’t know, though, whether the Trump-Kim summit will actually happen until the time and place are announced. Trump now is saying that he might get tough on Iran, holding out on certifying the deal under which Iran agreed not to build nuclear warheads. He’s facing a deadline of May 12 to decide whether to give his reluctant approval for what he has described as a “horrible deal” or whether to call for fresh negotiations.

Trump believes that refusal to certify the Iran agreement, negotiated during the presidency of Barack Obama, would send “the right message” to the North Koreans. Kim Jong-un would be made fully aware, according to this argument, that he would accept nothing short of complete, verifiable, irreversible denuclearization.

Trump faces tremendous pressure, however, from the other signatories, including all the four other members of the U.N. Security Council — Britain, China, France and Russia — plus Germany and the European Union, to go along with the deal.

Similarly, Trump will be under strong pressure to accept some form of compromise with Kim Jong-un regardless of where and when they finally get together.