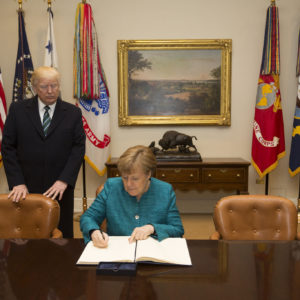 President Donald Trump accompanies German Chancellor Angela Merkel as she signs the guest book, Friday, March 17, 2017, in the Roosevelt Room, during her official visit to the White House in Washington, D.C. (Official White House Photo by Shealah Craighead)
[IS] Opinions

The Failure of American Leadership

Advocates for robust American global leadership are having a bad decade. Donald Trump’s election was clearly a wake-up call to the foreign policy establishment in Washington. In contrast to decades of bipartisan consensus that the United States was the “indispensable nation,” Trump appears to be monumentally indifferent to America’s role in the world.

His tense relations with longstanding allies and his decisions to withdraw from the Trans-Pacific Partnership and the Paris climate treaty have moved critics like former national security adviser Susan Rice to argue that Trump is “undoing American leadership on the international stage.”

Fears about Trump, however, simply echo concerns voiced throughout the Obama administration. Critics point to Obama’s withdrawal from Iraq, his failure to intervene in the Syrian civil war, and his failure to check Russia over Crimea and Ukraine as evidence of unhealthy retrenchment resulting in “the desperation of our allies and the glee of our enemies.”

The real issue, however, is not America’s failure to lead; it is the failure of American leadership. Since the end of the Cold War the United States has flexed its muscles repeatedly. The problem is that this has too often produced resentment, conflict and instability, precisely the opposite of what its proponents have promised. The fundamental reason for this failure is that American officials have too much faith in their power to dictate outcomes around the world, especially through the use of military force.

The past 15 years provide ample evidence of the perils of leadership. After the 9/11 attacks, the Bush administration launched a war on terrorism based on a strategy combining military intervention, regime change and nation building. The goal was to kill terrorists in the short run, destroy their organizations in the medium run, and over the long run to reshape the politics of nations to prevent terrorism from sprouting up in the first place.

The Obama administration mostly followed suit, scaling back in Iraq but pursuing regime change in Libya, surging in Afghanistan and expanding the drone war against terrorists in seven countries. Today the Trump administration has begun to escalate the fight against the Islamic State and al-Qaeda, empowering the Pentagon and the military to determine troop levels and make swifter battlefield decisions.

The problem in the Middle East hasn’t been the lack of leadership; the problem has been the failure to recognize that the American strategy has been a failure. Political leaders exaggerated the terrorist threat to the United States and then applied the wrong tools to the problem. Military intervention turned out to be great for getting rid of governments, but completely ineffectual at defeating terrorist organizations.

Since 2001 the number of terrorist groups and jihadist fighters has skyrocketed, al-Qaeda franchises continue to operate, and the invasion of Iraq inadvertently caused the chaos that helped the Islamic State take root. Everywhere the United States has intervened — whether by drone or by invasion — since 2001, in fact, is less stable and more violent today than it was before.

Nor has the nation-building game gone any better. The United States has spent billions of dollars on nation-building efforts in Iraq and Afghanistan rebuilding infrastructure, training the police and military troops, and providing internal defense against terrorists. The hard truth, however, is that neither country is a functioning democracy, neither is stable, and neither would last long without outside support.

Meanwhile, the failure of the war on terror has come with astronomical costs, both for the United States and for the Middle East. The United States has already spent trillions of dollars and seen 7,000 Americans killed in the fighting, while according to NGOs somewhere between 1.3 million and 2 million Iraqis, Afghans and Pakistanis have died. This doesn’t count those in Libya, Yemen, Syria or elsewhere whose deaths are a result of U.S. intervention and its consequences.

Sadly, despite this recent history, there is little sign that Washington is ready to recognize the limits of American leadership. Though the Trump administration may frustrate the foreign policy establishment on certain issues, it is clear that American reliance on military intervention in the Middle East is here to stay.

American leadership can indeed be a powerful influence for good, but the United States is neither all-powerful nor faultless. The United States, and the world, would be better off if America led less often and more thoughtfully.

A. Trevor Thrall is a senior fellow at the Cato Institute’s defense and foreign policy department and associate professor at George Mason University’s Schar School of Policy and Government.