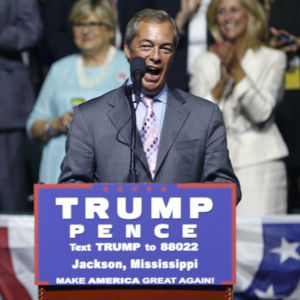 The Brexit leader and former head of the United Kingdom Independence Party spent the summer boosting Donald Trump every chance he got, comparing the Republican’s presidential bid to his own successful campaign that led Britain to vote in June to leave the European Union.

Farage brought this message to the Republican National Convention. He spoke on stage with Trump at a rally in Jackson, Mississippi. Just Tuesday, he published a laudatory opinion piece in the Washington Post: “Donald Trump calls himself ‘Mr. Brexit.’ Here’s why he’s right.”

Yet through it all, this populist politician from across the pond has protested he “won’t formally endorse” in the White House race. (He has also said, repeatedly, “I wouldn’t vote for Hillary Clinton if you paid me,” in reference to the Democratic nominee.)

So in this bizzaro political era of “supporting but not endorsing” candidates, is Farage making a distinction without a difference? On Wednesday, one prominent British politico appeared in Washington and said yes — the CEO of the official Vote Leave campaign.

“I think it was effectively an endorsement, absolutely,” Matthew Elliott said of Farage’s appearance with Trump, speaking to InsideSources after addressing the Heritage Foundation, a conservative think tank. “It’ll be interesting to see if it has any effect.”

Elliott noted that Farage is avoiding a “formal endorsement” in part because he learned a lesson from President Barack Obama.

In April, the president said the United Kingdom would be “in the back of the queue” for trade deals if it left the E.U. Given Obama’s popularity in Britain, the thinking was that his weighing in would help the Remain campaign. Instead, Elliott said, focus groups showed the statement irritated many voters. It taught Farage that telling a foreign electorate how to vote probably isn’t a good idea.

Asked by InsideSources, Elliott also declined to offer a preference between Trump and Clinton. But as a political strategist the BBC called “one of the most effective lobbyists at Westminster,” he did offer this commentary on the Republican:

In terms of the blue-collar voters, I think he’s got them fired up. I think they will turn out to vote. If I was advising his CEO, I’d be asking what he was doing about the white-collar voters, the more educated voters in the U.S. who perhaps voted for Mitt Romney and President [George W.] Bush. What are you doing to keep them as part of your coalition? If you’re going to win, you’ve got to build on what Mitt Romney did by perhaps getting some more blue-collar voters, but it’s essential to keep those white-collar, more educated voters as well.

Elliott said one of the “underappreciated” successes of the Leave campaign was how it built upon its white-working class base in rural areas, thanks to spokespeople like former London mayor Boris Johnson, a more cosmopolitan Conservative.

Whether its a referendum like Brexit or a campaign like Trump’s, Elliott said, “I think it’s right to say you need to have as broad a base as possible, and I think the support of people from the center — influential people who voters respect — is essential for any winning two-party race.”