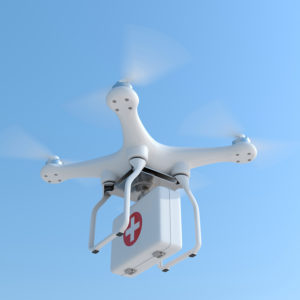 One area of medical innovation that almost shouts “21st century” is the use of unmanned aerial vehicles (UAVs or “drones”) for health care. In this area, as is often the case with cutting-edge technologies, there is tension between the desire for both progress and safety.

In several countries around the world, drones are already saving lives on a regular basis. In the United States, however, medical drones have tended to be one-off, experimental affairs. The use of UAV technology for medical missions is severely limited by Federal Aviation Administration regulations — mostly for very good reasons. Currently, Congress is considering bipartisan legislation (the “Drone Backlog Reduction Act”) to allow safe and timely innovation.

In order to understand the issues, we’ll address three questions here: How can drones enhance medical care? What is holding back medical drone innovation? And what might it take to speed innovation along?

Several countries around the world are demonstrating the usefulness of medical drones. Beginning in October 2016, the East African nation of Rwanda partnered with a California-based company, Zipline, to launch the world’s first nationwide system of medical drones. This system’s fixed-wing UAVs carry blood supplies, drugs and other medical goods to clinics across the country. Rwanda’s roads can be less than ideal, and drones can speed supplies through the air far more rapidly than a car or truck could carry them. Zipline is also partnering with the government of Ghana in a similar endeavor. Other companies are partnering with the governments of Tanzania and Vanuatu.

In Rwanda, thousands of successful medical UAV flights have saved lives. Zipline has documented a number of instances where drones constituted the difference between life and death — including critically ill children and hemorrhaging during childbirth. It’s easy to understand how drones can help in a country with poor roads, but why would we need such systems in the United States?

One of the authors of this article (Darcy Bryan) is an obstetrician, a licensed drone pilot, and a student pilot of manned aircraft. In her professional field, seconds can make the difference between life and death. Borrowing a common chestnut from law enforcement, it’s often the case that “when every second counts, an ambulance is just minutes away.” Despite the magnificent roads we enjoy in the United States, there are vast geographic areas, traffic jams, ice storms and other situations where delivery by road is less than ideal.

The United States has had a few celebrated cases of medical drone flights. The first such example was a single delivery of drugs to a pop-up clinic in Wise County, Virginia, in 2015. The state of Nevada has experimented with drone deliveries of defibrillators for heart attack patients. And in 2019, the University of Maryland Medical Center delivered a kidney across Baltimore for a transplant by drone.

So why not just establish systems like those in Rwanda, Ghana, Tanzania and Vanuatu? One big problem is that the U.S. airspace is heavily loaded with airplanes and helicopters. We also have lots of tall buildings and other potential hazards for drones. Potentially, a drone-airplane collision could be catastrophic. Several busy airports around the world have shut down briefly after nearby drone sightings.

Hence the FAA prudently places strict limitations on drone usage. Most prominently, operators are generally forbidden to fly drones beyond their visual line of sight. However, the FAA can grant waivers from this and other restrictions. Ten state and local governments were recently authorized to undertake experiments under the Unmanned Aircraft System Integration Pilot Program. However, the waiver process can be costly and slow. And the FAA has limited resources for processing such applications.

Easing the tension between progress and safety strikes us as a worthy goal to pursue.

Robert Graboyes is a senior research fellow with the Mercatus Center at George Mason University, where he focuses on technological innovation in healthcare. Dr. Darcy Nikol Bryan is a practicing obstetrician gynecologist and senior affiliated scholar with the center. They are co-authors of the center's Healthcare Openness and Access Project. They wrote this for InsideSources.com.