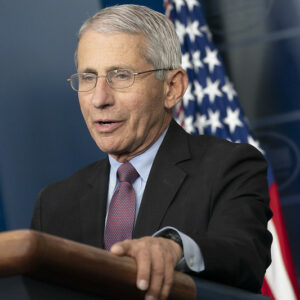 Anthony Fauci has been the public face of public health throughout the COVID-19 pandemic. Several recent pronouncements suggest that he has something in common with Gen. Douglas MacArthur — and this commonality is not a good thing. Fauci, it seems, shares MacArthur’s belief that technical expertise should exempt public officials from constitutional limitations on their exercise of power.

MacArthur publicly wished to override the wartime strategy of his commander in chief, President Harry Truman. Fauci is disturbed by the idea that the police powers of public health officials are subject to limitations imposed by federal courts.

In 1950, MacArthur headed the U.N. Command battling communist forces in Korea. Few of his peers could match MacArthur’s knowledge of and experience in military strategy or East Asia affairs. MacArthur, after all, had only recently masterminded Allied efforts in the Pacific during World War II.

After China inserted itself into the Korean War, MacArthur wanted to retaliate by bombing targets over the border in China. Truman feared setting off a wider war and denied the request. MacArthur made his displeasure known in public and in private cables to foreign governments. In early 1951, the deeply unpopular Truman stunned the nation by firing the highly acclaimed MacArthur for insubordination. MacArthur was received on Capitol Hill as a hero … but he would soon, as he told Congress, “fade away.”

Last month, Dr. Fauci expressed his own MacArthuresque disdain for constitutional norms. Specifically, he implied that the actions of public health technocrats should be exempt from legal constraints as interpreted by federal courts. The Biden administration, on advice from the Centers for Disease Control and Prevention, had ordered the continuation of mask mandates on airplanes and trains. In Florida, federal judge Kathryn Kimball Mizelle voided the mandate, based on her interpretation of the 1944 Public Health Service Act and her view that regulatory authorities had failed to follow proper rulemaking procedures.

On CNN, Fauci said, “We are concerned about … courts getting involved in things that are unequivocally public health decisions,” adding, “This is a CDC issue. It should not have been a court issue.” On CBS, he said, “The principle of a court overruling a public health judgment by a qualified organization like the CDC is disturbing in the precedent that it might send. … This is a public health matter, not a judicial matter.”

To be clear, Fauci’s public pronouncements are not acts of insubordination in the way that MacArthur’s musings were. The National Institutes of Health and the White House have obviously granted him broad license to express his opinions in public, and, unlike MacArthur, he agrees with the executive branch’s policy actions.

But the Constitution specifies an intricate web of checks and balances, including judicial oversight over executive actions. At Reason.com, journalist Eric Boehm said of Fauci’s comments, “This is either a complete misunderstanding of the American system’s basic functions or an expression of disdain toward the rule of law.”

Fauci is not alone in his view. Former Labor Secretary Robert Reich echoed and amplified Fauci’s sentiments when he tweeted a series of non sequiturs: “Perhaps there’s something wrong with a system that allows a 35-year-old, unelected, Trump-nominated judge — whom the American Bar Association deemed unqualified — to strike down the travel mask mandate for the entire country.”

My colleague Don Boudreaux (who is clearly no fan of former president Trump) shredded Reich’s tweet and Fauci’s comments in an eight-pronged philippic. As Boudreaux writes, “Reich skates alarmingly close to implicitly endorsing a totalitarian proposition that Fauci recently endorsed explicitly — namely, that government-employed public-health bureaucrats are above the law.”

One can debate whether MacArthur’s geopolitical instincts were sounder than Truman’s. (They probably weren’t.) One can similarly debate whether a continued mask mandate is justifiable. But, contrary to Fauci’s words, the judiciary unequivocally has the power to limit the executive branch’s police powers and reel in officials who stray beyond their statutory limitations. Expertise does not trump law.

It is important that federal courts, governors and others remember this principle as public health officials attempt to broaden their control over financial lending, identity theft, property law, racism, voting laws, wages, online poker and much, much more.

A little knowledge is a dangerous thing. So is a lot of knowledge.