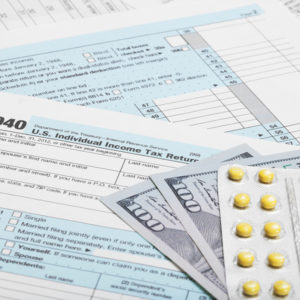 Too often in Washington, sound public policy takes a backseat to faux populism and cockamamie crusades against “capitalists.”

In a bizarre inflection of McCarthyism, members of Congress and presidential candidates see the nefarious hand of private industry everywhere and blame “greedy” companies for every problem under the sun.

And with these attacks come disastrous proposals that would require the unprecedented disclosure of sensitive business and personal information. One particularly problematic piece of legislation introduced by House Ways and Means Committee Chairman Richard Neal of Massachusetts could mean more snooping by the Internal Revenue Service and less healthcare access for millions of Americans.

This legislation, which has passed the House Ways and Means Committee, would force these businesses to file a new tax return with the IRS disclosing private information such as healthcare reimbursements, investor addresses, real estate debt and any other information deemed necessary by the secretary of the Treasury. No Treasury secretary — Democrat or Republican — should be empowered with such endless and unchecked power to seize private information from investors.

The fine for each incomplete or incorrect return is up to $1 million, which could be used to provide healthcare for 50 families a year instead of disappearing into Uncle Sam’s coffers. Investors facing fines would have significant due-process protections stripped away.

Neal’s move appeals to proponents of rate-setting (aka price-fixing) of healthcare prices, who largely believe that high medical bills are a sinister conspiracy by private equity firms that invest billions into the U.S. healthcare system.

In their telling of the story, these “sinister” companies buy out large physician-staffing companies and tell doctors to stay out of network so that they can “surprise bill” their patients instead of accepting meager insurance payments. This bizarre story ignores the simple fact that, when patients have to go into bankruptcy because of unpaid healthcare bills, everyone loses — including doctors and their employers.

Well, almost everyone. Well-padded and taxpayer-subsidized insurance companies have realized that they can force providers into a no-win situation by demanding lousy, restrictive reimbursement policies. When doctors disagree with subpar insurer terms and go out-of-network, millions of patients are left holding bills they often can’t (and shouldn’t) pay for.

Insurers use the resulting hoopla to demonize private equity companies and lobby for legislation forcing doctors and their employers to accept skimpy in-network reimbursements. For example, legislation pursued by Sen. Lamar Alexander (R-Tenn.) and Reps. Frank Pallone (D-N.J.) and Greg Walden (R-Ore.) would install a government price-fixing scheme that would benefit Big Insurance at the expense of patients, especially those in rural areas.

The insurance industry and their allies are opposed to the “arbitration” approach proposed by Neal and ranking member Kevin Brady (R-Texas), which establishes a process for doctors and insurers negotiating on reimbursements while holding patients harmless. This process has been a resounding success in New York, where out-of-network billing has been reduced by 34 percent and in-network ER bills are down 9 percent.

Big Insurance would rather lawmakers embrace California’s failed rate-setting model, which gives doctors little recourse in negotiating with insurers. Unsurprisingly, declining payments to doctors has led to the consolidation of doctor’s offices statewide and triggered a spike in care access complaints.

But, if insurers can’t get rate-setting passed, they at least want to stick onerous reporting requirements onto investors putting tens of billions of dollars into specialty practices that help patients and make healthcare more accessible. Mandated government reporting requirements are almost never good for consumers, as compliance costs inevitably get passed along to working Americans.

System administrative costs already total $2,500 per person, and greater compliance costs from the Neal bill will only drive that total higher and make surprise bills all the more devastating.

Credit goes to Rep.  Brady and House Ways and Means Committee Republicans for rejecting this harmful legislation, calling it “an approach that is an unprecedented abuse of our tax code.” Brady is exactly right.

Congress can only address the pressing problem of surprise medical billing by rejecting Chairman Neal’s anti-investment legislation and kicking government price-fixing to the curb.