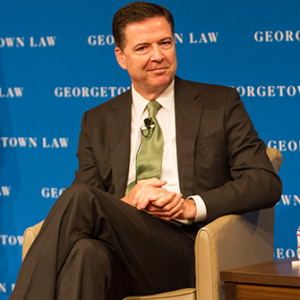 Posted to Technology May 22, 2015 by Giuseppe Macri

The leaders of two top U.S. intelligence agencies warned Washington this week that letting key provisions of the Patriot Act expire at the end of May would do more to U.S. intelligence than just dismantle the National Security Agency’s mass telephone surveillance program.

While speaking at Georgetown University’s annual cybersecurity conference this week, FBI Director James Comey said the sunset of Section 215, which authorizes the signals intelligence agency to collect the phone record metadata of virtually all Americans’ landline telephone calls, would also mean the end of other essential surveillance tools Comey described as “non-controversial.”

“These three are going to go away June 1, and I don’t want them to get lost in the conversation about metadata,” Comey told the crowd gathered at the Georgetown Law campus on Wednesday.

Beyond granting the NSA the power to sweep up, store and surveil telephone numbers, dialed numbers, call durations and locations, Section 215 also grants the FBI the power to subpoena “any tangible things,” including business, medical, transaction and log records from hotels, bookstores, libraries, car rental agencies and more from any person connected to a counter-terrorism investigation.

The Justice Department itself decides the relevance of such records free of oversight from a judiciary, the only limitation being that “such investigation of a United States person” be “not conducted solely upon the basis of activities protected by the First Amendment to the Constitution.”

Another is the so-called “lone wolf” provision, which gives gives intelligence agencies authorization to surveil “lone wolf” targets not affiliated with major targets of anti-terror investigations, such as al-Qaeda and ISIS. The lone wolf provision states the authority does not apply to citizens of the U.S.

The third authorizes what are known as “roving wiretaps,” which allow agencies to surveil multiple communication devices belonging to a single terrorist suspect, whether they be Internet or telecommunication-based. The provision is meant to help agencies stay one step ahead of suspects that frequently use “burners,” or devices used for a short while before they’re traded for another, specifically to avoid tracking. Law enforcement have used such wiretaps since 1986.

“If we lose that authority, which I don’t think is controversial with folks, that is a big problem,” Comey said, adding that such provisions are key to filling in surveillance gaps when the FBI can’t use a grand jury or national security letters to subpoena records.

The fight to keep that authority is down to the wire in the Senate, where Kentucky Republican Rand Paul staged a faux-filibuster for nearly 11 hours into late Wednesday lambasting fellow Kentuckian and Majority Leader Mitch McConnell’s call to pass a clean extension of the expiring Patriot Act provisions.

“I don’t think we’re any safer looking at every American’s records,” Paul said, adding that the law “isn’t about the vast majority of good people who work in government.”

Though dramatic and no doubt helpful PR for the presidential hopeful’s campaign for the White House, the speech didn’t actually do anything to delay the chamber’s consideration of the extension or the U.S.A. Freedom Act reform bill passed by the House last week, as neither have been formally brought to the floor. That leaves Paul off the hook for potentially keeping lawmakers in Washington through the Memorial Day weekend.

But not McConnell. The majority leader doesn’t support the bill, which renews the expiring provisions while reforming the bulk phone surveillance program, but he said he intends to bring it to the floor on Saturday under the assumption it won’t get enough votes to pass.

Part of those reforms include moving the storage of telephone records into the hands of telephone providers themselves, and requiring the NSA to obtain court orders based on narrowed criteria to search for specific data.

In a letter to Senate leaders Wednesday, NSA Director Michael Rogers said the timeline for reforming the program was doable if the upper chamber passes the bill.

“The U.S.A. Freedom Act would establish a 180-day period for transitioning from the current bulk-collection program for telephone metadata to a model where queries would be carried out against business records held by telephone service providers,” Rogers wrote. “We are aware of no technical or security reasons why this cannot be tested and brought on line within the 180-day period.”

According to a memo circulated by the Justice Department the same day, the NSA will begin shutting down the 215 Program after Friday if Congress fails to act, after which “it will become increasingly difficult for the government to avoid a lapse in the current NSA program of at least some duration.”

“NSA will attempt to ensure that any shutdown of the program occurs as close in time as possible to the expiration of the authority, assuming the program has not been reauthorized in some form prior to the scheduled sunset,” DOJ said, adding that a “wind down” of the program was necessary “to ensure that it does not engage in any unauthorized collection or use of the metadata.”

If the U.S.A. Freedom Act fails to pass, McConnell will present a two-month clean extension to give lawmakers more time to debate the issue, leaving the future of the expiring provisions uncertain with the House already on recess for the holiday.

“The House has acted. It’s time for the Senate to act,” House Speaker John Boehner said Thursday, leaving a door open for the lower chamber to consider any eventuality the Senate may take when the House is back in session on June 1 — the deadline for extension. “If they act, we’ll take a look at what they do and make a decision on how to proceed.”