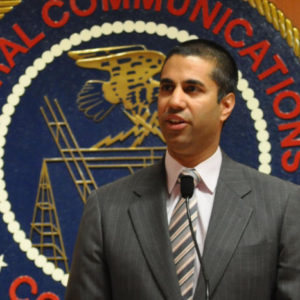 The head of the Federal Communications Commission is defending a decision to suspend nine companies from participating in a program to subsidize phone and internet service for poor Americans.

Last Friday newly minted Republican FCC chief Ajit Pai announced he was revoking the approval of nine applicants to participate in the program, which provides a $9.25 monthly subsidy to poor households to offset the cost of telephone or broadband service.

The applications were approved weeks ago during the final days of the previous administration led by Democratic Chairman Tom Wheeler, despite the protest of the FCC’s two Republicans. Pai described their approval as a form of “midnight regulation” that ran counter to a request from Congress that the agency halt consideration of any controversial items during the election transition.

Pai’s move invited a flurry of criticism from consumer groups, a fellow commissioner, and media, prompting a blogged reply from the chairman to “set the record straight.”

Those applications remain pending at the commission, though several were filed without coordinating with representatives from the tribal lands where they’re seeking to provide service, a violation of FCC rules. Those living on tribal lands can be eligible for an increased subsidy of $34.25.

“These Tribal representatives thus requested that the designations be reversed,” Pai wrote. “Moreover, two of the designated providers were approved in the middle of the 30-day period for public comment  —  that is, before the public even had a chance to weigh in on the designation. Whatever one thinks of the merits of these applications, that was plainly improper.”

All but one of the applicants don’t have any customers yet with the exception of Kajeet, which partners with school districts in 41 states and Washington, D.C. to provide off-campus wireless broadband and phones for poor children to do homework.

The FCC’s only remaining Democratic commissioner, Mignon Clyburn, slammed the move to include the pulled approvals in the “Friday News Dump” instead of letting the full commission consider it.

“By eliminating the designations of nine entities to provide Lifeline broadband service, the Bureau has substantially undermined businesses who had begun relying on those designations,” Clyburn said. “These providers include a minority-owned business, a provider enabling students to complete their homework online, and others serving Tribal lands.”

Rooting out waste, fraud and abuse in Lifeline has been a significant focus of Pai’s office since joining the commission. During an investigation last year he highlighted several forms of widespread fraud that lacked agency safeguards. The agency doled out enforcement action on several Lifeline providers last year for fraud, including one of the wireless providers investigated by Pai. Another marked the agency’s largest fine of a Lifeline provider ever.

“Every dollar that is spent on subsidizing somebody who doesn’t need the help by definition does not go to someone who does,” Pai said Tuesday. “That means that the commission needs to make sure that there are strong safeguards against waste, fraud, and abuse before expanding the program to new providers.”

Reforms tackling abuse have since been implemented. However, the National Verifier system, a database that will independently determine eligibility created under Wheeler, won’t go online until later this year, and won’t expand to all states until 2019. The verifier was included in a Lifeline reform package that expanded subsidies to cover internet service and uncapped its total budget. Pai and fellow Republican Commissioner Michael O’Rielly voted against those reforms.

Lastly, Pai said a pending court challenge could take the authority to designate Lifeline providers away from the FCC and give it to states.

“Putting the designations on hold gives the FCC the chance to make sure the process is legally defensible and to avoid potentially stranding customers if the courts ultimately deem the process unlawful,” he said.

“Less than two weeks ago, Chairman Pai committed that his leadership of the FCC would focus on closing the digital divide,” senior counsel Phillip Berenbroick said. “Today, he has reneged on that commitment and signaled that the FCC might now be actively hostile toward small, competitive broadband providers and affordable access, which would exacerbate the digital divide.”