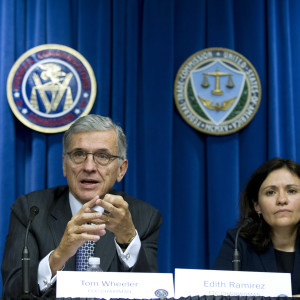 A coalition of Washington’s most influential Internet service and content provider interest groups are joining forces to push back against new, potentially stronger data privacy regulations from the Federal Communications Commission.

“If the courts determine that the FCC has authority to regulate broadband privacy, we encourage you to develop a framework that offers consumers robust privacy protection, while at the same time allowing broadband providers to continue to innovate and compete,” the groups wrote.

The new regulations include giving the agency the power to set and enforce consumer data privacy standards over Internet service providers, a job previously overseen by the FTC before the FCC reclassified Internet connectivity from an information service to a Title II-regulated communications public utility, bringing it under FCC jurisdiction.

“We recommend that any FCC framework be consistent with the successful FTC approach, which is grounded on prohibiting unfairness and deception,” the letter reads. “The FTC’s time-tested framework has accomplished two important goals — it provides consumers with meaningful privacy protection and helps to enable a dynamic marketplace that supports the emergence of innovative new business models.”

Last month Wheeler repeated the FCC won’t exercise data privacy enforcement over edge providers like Netflix, Amazon, Apple and Google — all members of CTA, another letter signee — and that they will continue to fall under the jurisdiction of the FTC.

Critics in and outside the agency have accused the FCC of making a power grab in usurping the authority of another agency and setting unclear standards that set companies up to fall short of the mark.

Wheeler has defended the rules, saying the FCC has decades of precedent ensuring telephone companies protect the personal information of customers. The agency has already engaged in enforcement action and settlement with AT&T and Cox last year for millions in fines for failing to properly secure user data and giving both employees and third parties improper access to customers’ private information.

“All tech companies should be held to the same standards on consumer privacy, whether they offer Internet access, online services, or devices,” president of TechFreedom Berin Szoka said of the letter. “Stealing the FTC’s jurisdictional lunch money was bad enough — the FCC shouldn’t be able to toss out its legal standards, too.”

“There is no reason for various providers of Internet services and applications, regardless of how they are classified under the archaic telecom regime, to be subject to varying requirements,” president of the Free State Foundation Randolph May agreed. “I hope the courts ultimately hold that the FCC’s Internet power grab is unlawful.”

Privacy advocates disagreed, and instead pointed the finger at companies for trying to play fast and loose with consumer data for the benefit of more effective, targeted marketing.

“The undersigned organizations urge you to commence a rulemaking as soon as possible to protect the privacy of broadband consumers,” another letter to Wheeler from privacy groups including the Center for Digital Democracy, the American Civil Liberties Union and the Electronic Frontier Foundation reads.

“As Commissioner Julie Brill of the FTC stated in a recent speech on broadband and privacy, the FCC reclassification of broadband as a Title II common carrier service adds it as ‘a brawnier cop on the beat’ on privacy issues. She welcomed the opportunity for the two agencies to work in cooperation to create ‘strong consumer privacy and data security [that] are key ingredients of our data-intensive economy, including the practices of broadband providers.'”