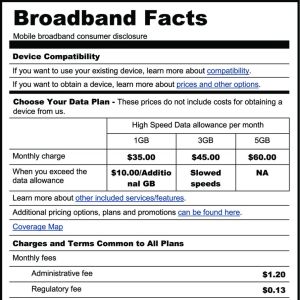 The Federal Communications Commission on Monday unveiled its latest rule for Internet service providers under net neutrality — nutrition-style labels for broadband service packages, designed to give consumers more information about the download speeds, data caps and fees associated with their service plans.

“These labels provide consumers clarity about the broadband service they are purchasing, not only helping them to make more informed choices but also preventing surprises when the first bill arrives,” FCC Chairman Tom Wheeler said Monday.

The agency suggests fixed and mobile broadband providers use the labels under the transparency requirement in last year’s Open Internet Order — the same rulemaking that reclassified ISPs as common carriers and prevents them from blocking, throttling or prioritizing Web traffic.

In the order the FCC asked its Consumer Advisory Committee “to recommend a disclosure format that should be clear and easy to read – similar to a nutrition label found on food items – to allow consumers to easily compare the services of different providers.”

Labels mimic those required by the Food and Drug Administration on consumer products, and were developed in conjunction with the Consumer Financial Protection Bureau. The CFPB has designed similar disclosure requirements for financial services products in banking and investing including loans, mortgages and credit cards.

The labels will require providers to disclose fees like overage charges and practices like reduced traffic speeds for users exceeding their download thresholds upfront. Information about price, early termination and administrative fees, monthly data allowances and the consequences for exceeding them will be included.

Wheeler and CFPB Director Richard Cordray unveiled the label design at an event in Washington Monday, where members of the FCC’s Consumer Advisory Committee — made up of industry representatives and consumer groups — recommended the labels unanimously.

“Customers deserve to know the price they will actually pay for a service and to be fully aware of other components such as data limits and performance factors before they sign up for service,” Wheeler said.

Providers won’t be forced by the agency to adhere to the exact design dropped by regulators, but those that do will have greater assurance they’re complying with net neutrality transparency requirements, according to the FCC.

“Consumers deserve to know before they owe, with clear, upfront information about the prices, risks, and terms of the deal,” Cordray said. “Broadband is quickly becoming a necessary part of everyday life for millions of consumers. I commend Chairman Wheeler and the FCC for bringing new transparency to the broadband market, which will help people understand what they are getting before they sign up.”

The FCC reports it receives 2,000 complaints every year about “surprise fees associated with consumers’ Internet service bills,” which at times can be 40 percent higher than advertised after taxes and fees.

“With the average monthly cost of broadband service ranging between $60 and $70, consumers deserve to know what they are going to get for their money,” the agency said in a statement Monday.

The labels follow up on recommendations made by the advisory group last year and a request from Congress to the agency to give consumers more easily accessible, digestible information about their Internet service plans.

Rules surrounding the labels will take affect after the Office of Management and Budget gives its nod to the enhanced transparency requirements in the Open Internet Order.

“The safe-harbor disclosure labels unveiled today will go a long way in helping to standardize descriptions of Internet service offerings,” Sarah Morris, counsel at the pro-net neutrality think tank Open Technology Institute, said Monday. “Consumers now have an alternative to the jumble of formats, vague descriptive terms, and otherwise piecemeal disclosures that have been characteristic of the broadband marketplace.”