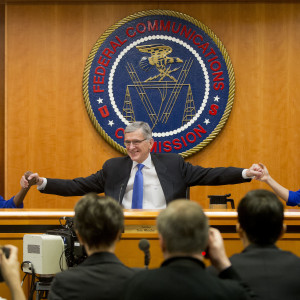 The landmark net neutrality ruling expected from a federal appeals court this spring isn’t just about the Federal Communications Commission’s Internet rules — the case will have a lot to say about whether the presidential appointees writing the far-reaching new regulations broke the law themselves.

That allegation is at the heart of an industry group’s lawsuit accusing the Federal Communications Commission of violating the Administrative Procedure Act — a federal statute requiring agencies to open the regulatory process to public scrutiny.

If the FCC violated the law in creating the net neutrality rules adopted 13 months ago, look for the regulations that resulted to be thrown out, say industry observers following the case.

“The rules that they ended up with were barely described in the original notice,” said Berin Szoka, a former telecommunications regulatory attorney at the Washington, D.C., powerhouse firm Latham & Watkins and now president of TechFreedom. “I think that’s kind of an open and shut case, frankly.”

Former FCC attorney and Phoenix Center President Larry Spiwak agreed, telling InsideSources that the 2015 Open Internet Order reclassifying Internet service providers was clearly a violation of APA rules on transparency and public comment: “They just made this up whole cloth at the last minute.”

Supporters of net neutrality — including President Barack Obama, who campaigned on the issue in 2008 — contend the rules are necessary to prevent service providers like Comcast and Verizon from throttling consumers and content providers on the Internet. Opponents, including most Republicans, argue the FCC rules represent an ill-conceived regulatory power grab that threatens one of the economy’s most robust sectors.

According to the suit challenging the rules, filed in the D.C. Circuit Court of Appeals by telecommunications trade group USTelecom, the FCC’s notice of proposed rule-making (known as an NPRM) did not specifically state the agency’s intention to reclassify the Internet as a public utility under Title II of the 1996 Telecommunications Act. The 1996 legislation subjects telephone carriers to stricter pro-competition regulations that originated in the Bell Telephone monopoly era.

Speculation was however in the air, especially after Obama publicly called on the agency to adopt strong net neutrality rules over fixed broadband and wireless ISPs, including Title II. The FCC’s Open Internet NPRM — passed before the White House’s late-2014 call to action — asks a series of open-ended questions about potentially seeking Title II reclassification, and sought comment on those questions.

“There is a night-and-day difference between the NPRM’s proposal to adopt specific rules to preserve ‘Internet openness,’ and the Order’s invention of a ‘Modern Title II’ ‘tailored for the 21st Century,’ Order, subjecting broadband to vast swaths of common-carrier regulation unrelated to openness,” USTelecom and its backers said in a brief to the court.

“The FCC’s responses distort the legal standard and disregard bedrock APA notice requirements,” the brief reads. “That is not the law.”

The petitioners hammered the FCC on APA notice, with particular emphasis on mobile broadband, during oral arguments in December, alleging the order left the potential to reclassify mobile even more ambiguously than fixed.

Prior to the Open Internet Order the FCC classified mobile broadband as a personal service, not a fixed network edge provider like Netflix and Amazon. Lawyers arguing against the rules used that change in designation to especially target the NPRM’s lack of notice.

Associate general counsel for the FCC Jacob Lewis defended the NPRM, arguing challengers should have been able to “figure out” the notice could apply to wireless as a “functional equivalent” of wired, quoting the term used in the order.

“The notice said that the commission was considering whether or not to reclassify mobile broadband,” Lewis told the judges in December. “I think that the notice objection here … is trying to impose a requirement on the commission to write notice for a second grader. It really seems like it is putting the burden on the agency to walk the parties by the nose though these issues.”

The notice issue widened in scope last week with the release of a report by the Senate Homeland Security and Governmental Affairs Committee, citing subpoenaed FCC documents and emails generated over the course of drafting the Open Internet Order, which found career staffers at the FCC “raised significant concerns about the agency following proper notice-and-comment procedure as required under the Administrative Procedure Act.”

Documents handed over to the committee by the FCC over the course of 10 months found the agency completed a draft of the Open Internet Order taking the “hybrid approach” to net neutrality minus Title II reclassification called for by Chairman Tom Wheeler prior to Obama’s address. After the president’s November 2014 YouTube statement, edits to the order officials were aiming to drop during the commission’s December open meeting were “paused,” in the words of Wheeler himself.

“At the conclusion of the pause, Wheeler instructed FCC staff to change course and draft an order that would follow the president’s proposal of a Title II reclassification,” the report reads. “The FCC staff raised concerns about the agency following proper notice-and-comment procedure, as required under the APA. Specifically, the FCC’s career professional staff advised that the record to support Title II reclassification for both fixed and wireless broadband was thin and needed to be bolstered.”

Two days into the pause following the president’s address, Wheeler’s office ordered staff to identify issues potentially requiring a new NPRM if the FCC were to invoke Title II, including “areas where there is a serious APA notice problem with substantial litigation risk,” “areas where we could expect to have to argue that our actions were a logical outgrowth of the NPRM,” and “areas we are confident that we have adequate notice but would be better informed by more targeted comment.”

Responses poured in from the likes of FCC Wireline Competition Bureau Chief Matt DelNero, Chief Technology Officer Scott Jordan and General Counsel Jonathan Sallet suggesting “changing the definition of ‘public switched network’ to fit broadband, describing discriminatory practices, refusals to upgrade capacity, and access fees as “fairly poor” and calling for “more comment in the record” with regard to forbearance for mobile and reclassification.

Though staff drafted a notice highlighting nine areas of concern, agency leaders eventually decided against another notice, prompting one media aide responsible for defending the agency’s decision to ask for “more on why we no longer think record is thin in some places.”

Another draft of presumptive media questions and answers prepared for Wheeler read:

“Q. Has there been discussions between the WH and the FCC leading up to this rollout?”

“A. The FCC kept the WH apprised of the process thus far, but there have not been substantive discussions [IS THIS RIGHT?].”

“Chairman Wheeler chose to leave the record inadequate, abandon the [public notice] that was carefully drafted by career professional staff, and forge ahead with the reclassification of broadband as a telecommunications service,” the report reads. “He did so with the FCC staff aware of ‘serious’ APA concerns, sacrificing regulatory certainty for political expediency.”

“I publicly announced that we were hitting pause for the purpose of enriching the record,” Wheeler said. “And I think I said at that time, ‘We know the big dogs are going to sue on this, and we want to make sure that we’ve got i’s dotted and t’s crossed.'”

Johnson further pressed Wheeler on another issue underlined in the report — numerous emails sent between Wheeler’s office and the White House and at least a dozen White House visits by Wheeler while the agency was drafting the order, none of which were submitted by the FCC for the public record in ex parte filings. In the FCC’s case, that includes “communication directed to the merits or outcome of a proceeding” between a member of Congress or the executive branch.

“The only time you need ex parte is when there is ‘substantial significance and is clearly intended to affect the ultimate decision,'” Wheeler responded quoting the agency’s rules and pointing to a meeting former President Ronald Reagan held with FCC Commissioner Mark Fowler in 1983 over television rerun revenues.

“This is more of a continual and recurring interaction between the FCC and the White House that was not in place during the Reagan administration,” a congressional aide told InsideSources.

Though the court is due to rule on the case before the end of March, the aide noted it’s still possible one of the parties in the case could submit the report for the record, and for the court to take administrative notice of the potential APA violations.

Others see the report as a critical part of the case against the FCC’s rules. Before deciding the legality of the rules themselves, the court should examine the way the FCC reinterpreted statutes to justify reclassification in the order, TechFreedom’s Szoka told InsideSources.

Phoenix Center’s Spiwak said the APA violations including notice and ex parte surrounding the Open Internet Order represent a “systemic corrosion of due process at the FCC.”

“There’s a lot of APA issues that are involved here” Spiwak told InsideSources. “Technically, the White House should be filing ex parte notices because they are not part of the FCC, and that’s been a problem that’s been endemic to the FCC for many years.”

Spiwak said it was “inappropriate” for the administration to go on YouTube and call for Title II instead of filing comment with the FCC, but pointed to the FCC’s lack of notice as the premiere APA concern.

Instead the FCC held a series of meetings with invited commenters to talk about Title II, which were mentioned in staff emails included in the report.

“No, that’s not how that works,” Spiwak said. “This report provided evidence of what everyone knew was going on anecdotally.”

The “radical 180-degree difference” represents a lagging respect for due process at the agency, said the former FCC staffer. Spiwak described examples in a critical Hill op-ed last week, including legal fumbles like trying to circumvent donor disclosure laws or discuss rulemaking with parties outside the agency during the Sunshine period.

“Part of the problem I think is that Mr. Wheeler is not a lawyer, and he views the world from a lobbyist perspective as opposed to somebody trained to respect the law,” Spiwak said, pointing to seeming conflict-of-interest appointments at the agency under Wheeler’s watch, including Gigi Sohn, former president of the pro-net neutrality group Public Knowledge, now a counselor in Wheeler’s office.

“I don’t think that anybody’s done more harm to the institutional reputation of the FCC than Tom Wheeler has,” Spiwak said. “It has gotten to the point where I think he’s doing irreparable damage.”