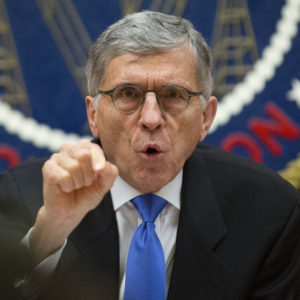 FCC wireless division head Jon Wilkins sent a letter to the carrier Thursday in response to an AT&T letter to the FCC last month attempting to dissuade the agency from considering zero-rating a violation of net neutrality.

“We find that those responses fail to alleviate the serious concerns expressed in our November 9 letter regarding the potential anti-competitive impacts of a wholesale Sponsored Data program for zero-rated mobile video services,” Wilkins said in his second letter to AT&T in less than a month.

“Indeed,” he continued, “your submission tends to confirm our initial view that the Sponsored Data program strongly favors AT&T’s own video offerings while unreasonably discriminating against unaffiliated edge providers and limiting their ability to offer competing video services to AT&T’s broadband subscribers on a level playing field.”

The first letter, sent one day after President-elect Donald Trump won the general election, the wireless chief said AT&T’s new plan “may obstruct competition and harm consumers by constraining their ability to access existing and future mobile video services not affiliated with AT&T,” and asked the carrier to explain otherwise.

In its response AT&T said it offers video competitors like Netflix and Hulu the same ability to pay to sponsor their data and exempt it from subscriber data caps. It added that the service comes at a cost to AT&T as well, since it has to expand its infrastructure to meet subscriber demand for the free service, which it urged the FCC not to deprive consumers.

Those arguments did nothing to alleviate the FCC’s concerns. The agency gave AT&T and Verizon, with its own zero-rated NFL games and go90 mobile-video app, until Dec. 15 to take another shot at persuading the regulator.

“We have therefore reached the preliminary conclusion that these practices inhibit competition, harm consumers, and interfere with the ‘virtuous cycle’ needed to assure the continuing benefits of the Open Internet,” Wilkins said.

The letter comes four days after the AT&T-owned DirecTV announced its new pay-TV streaming service aimed at cord-cutters, expected to attract 3 million users, or 20 percent of the market, by 2020. DirecTV Now offers the most competitive deal so far with 100 channels for $35 a month, and was one of the chief reasons the wireless carrier acquired DirecTV and is attempting to buy Time Warner. AT&T subscribers who sign up can stream unlimited DirecTV content from their mobile devices.

The FCC estimates other video competitors would have to pay $16 to zero-rate every 10 minutes of LTE video streamed on AT&T’s network by one customer, and $47 for a customer using 30 minutes per day, making competition against DirecTV’s $35/month untenable.

“These costs alone would represent 46 percent to 134 percent of DIRECTV Now’s $35 retail price, against which third parties will be competing for AT&T Mobility customers, and would be borne in addition to all other costs of providing service by the unaffiliated provider,” Wilkins’ letter reads.

“AT&T seems to present the unaffiliated provider with a choice that is unreasonable on its face,” he continued, “either pay a Sponsored Data rate (resulting in a $16-$47 per month – or higher – incremental cash cost not incurred by AT&T) that would make it very difficult, if not infeasible, to offer a competitively-priced service, or instead require its customers to pay significant amounts for their own usage of data while AT&T’s zero-rated DIRECTV Now service offers customers the same usage for free.”

In its response the FCC asked for AT&T to include detailed information about the use and cost of DirecTV and AT&T data streamed on its mobile network compared to competitors like Netflix, Hulu and Sling TV, packaging and pricing information for its plans, any negotiations with competitors to sponsor data and if/how the DirecTV side of the merger compensates AT&T for network use.

“We will provide the FCC with additional information on why the government should not take away a service that saves consumers money,” AT&T responded Friday.

Despite being hamstrung by Congress from moving forward with two major rulemakings to upend the set-top box market and establish price caps for business broadband during a presidential transition, the move shows Democratic FCC Chairman Tom Wheeler won’t let his legacy — of which net neutrality is the cornerstone — be wiped away without a fight.

“[L]ast night, Chairman Wheeler launched yet another broadside against free data for consumers, notwithstanding the objections of Republican commissioners,” Pai said in a statement. “This end-run around Congress’s clear instruction is sad — and pointless. For any unilateral action taken by the Wireless Telecommunications Bureau at the chairman’s direction in the next 49 days can quickly be undone by that same bureau after January 20, 2017.”