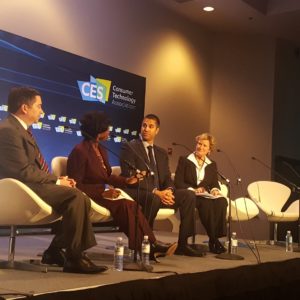 The only Federal Communications Commissioner to vote for net neutrality and keep her seat in the next administration defended the divisive rules at the Consumer Electronics Show 2017 Thursday, alongside Republican colleagues who will take control on January 20.

Commissioner Mignon Clyburn said while the rules aren’t perfect, they provide the kind of assurance innovators like those attending CES need.

“I just happen to believe this particualr order has and will continue to do an incredible job of further enhancing what we see on the showroom floor,” Clyburn said. “I’ve got two people on my right and my left who might think a bit differently.”

Clyburn will occupy the only Democratic seat at the FCC after Donald Trump’s inauguration later this month.

Clyburn penned a Thursday op-ed with the FTC’s only remaining Democratic Commissioner Terrell McSweeny. The two defended the Open Internet Order and new privacy rules for internet providers, an outgrowth the FCC passed in October with the FTC’s blessing.

“Give it a read, give us some feedback,” she continued, “because I really think at the end of the day what we’ve done is provide the type of framework we need to allow this country to continue to grow, allow the freedoms and the openness the rest of the world envies, and I’m very proud of that decision.”

The panel comes days after a Washington-based trade group representing cable giants Comcast, Charter and Cox Communications petitioned the FCC to repeal the toughest privacy rules either agency has ever endorsed.

FCC rules passed in October bar internet providers from collecting virtually any information from subscribers without their permission, including web browsing history or app usage. Edge providers like Facebook and Google, the dominant forces in targeted advertising, are outside of the FCC’s jurisdiction and subject to less stringent Federal Trade Commission rules.

“They are unnecessary, unjustified, unmoored from a cost-benefit assessment, and unlikely to advance the Commission’s stated goal of enhancing consumer privacy,” wrote NCTA: The Internet and Television Association in a petition filed with the FCC Monday.

The trade groups said the rules exceed the FCC’s authority, ignore the FTC’s precedent-setting rules that require user consent only when data is sensitive, violate the First Amendment by limiting service providers but not edge providers, and set unrealistic security standards for data retention and breaches.

Internet providers said the rules make the false conclusion that internet providers have a unique, overarching view of subscriber activity online. NCTA added the rules will give an unfair advantage to edge providers, which already dominate the targeted advertising market.

Democrats on the commission passed the rules on a 3-2 vote over the dissent of its two Republicans. Commissioners Michael O’Rielly and Ajit Pai, who may take over as acting chairman later this month, voted against net neutrality in 2015, which reclassified internet providers as public utilities and moved them outside FTC jurisdiction and under the FCC’s.

Pai and O’Rielly said in December they plan to revisit net neutrality “as soon as possible” after the Senate refused to reconfirm Democratic Commissioner Jessica Rosenworcel to another term and Chairman Tom Wheeler announced his Jan. 20 departure date, cementing their majority.

NCTA said “the commission’s likely re-examination of that decision” and a pending appeal of a court decision upholding net neutrality “further support the relief requested here[.]”

“You’re smiling a little bit too much,” Clyburn joked to O’Rielly on stage Thursday.

“I have an open door policy, I look forward to listening to any concerns from the people in this room or otherwise and thoughts you may have,” O’Rielly said. “I don’t think I’ve seen everyone by my door, but maybe next time the next commission will be a little different.”